Seth Macfarlane Dishes: A Family Guy Movie Is Coming Soon, Plot Would Be Impossible On TV 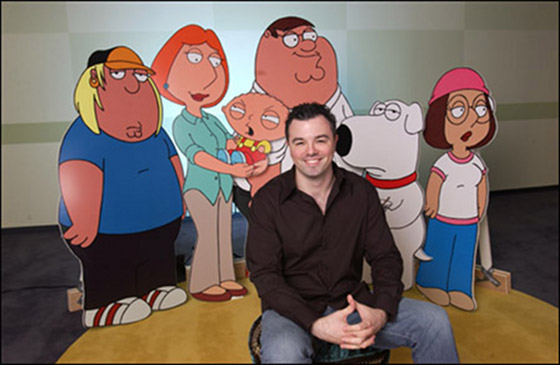 Hmm…this is intriguing! I think that people either love or hate Family Guy, there really isn’t an inbetween. I can laugh (or at least smile on the inside) at about 85% of their jokes, but for me, some just aren’t funny. I don’t know if it’s because I’m a woman and it’s written for a male audience, or if it’s personal taste. But I do consider it a guilty and occassional pleasure, so I was quite pleased today to learn that they’re following in the footsteps of The Simpsons and bringing Stewie to a big screen! Imagine all the world domination! Creator Seth Macfarlane talked to some students at UCLA and described what’s happening concerning the movie:

“It’s just a matter of when. It’s hard to do that while you have the series going on at the same time; I think that’s why it took The Simpsons 20 seasons to figure out how to do it. We do know what the Family Guy movie will be. The Simpsons movie, I thought, was hilarious, but the one criticism I would have is that it’s a story they probably could’ve done on TV. There could’ve been an episode that had that plotline. That’s the challenge with animation. You pretty much can do any story you want, so what is the reason for the movie? We finally hit on the answer to that question, and it will be something that would be impossible to do on TV.”

Something that would be impossible to do on TV, huh? I’m trying to imagine what that means. There is an obvious problem of keeping it appropriate for TV standards, but other than that, I think the only block they encounter on a TV episode is length. They’ve dealt with that before though, by releasing double episode installments of the Family Guy spin on Star Wars. Any ideas what he means? Would you see a Family Guy movie?