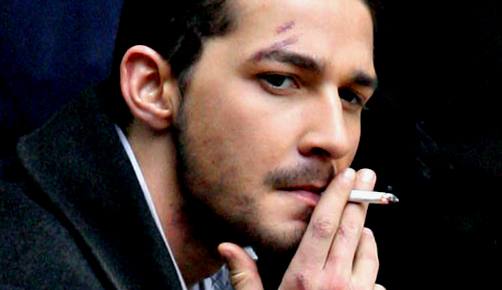 Shia Labeouf reportedly got into a wacky altercation last week in London as he and his Nymphomaniac co-star Mia Goth enjoyed a drink in New Cross. The incident took place at the pub when one man decided to be funny and take the hat Shia was wearing – probably to avoid having people come up to him while he and his friend went for a day out. The unidentified man allegedly took Shia’s hat and refused to give it back to him despite Labeouf asking the man several times to pass him back the hat – he still refused.

The two then got into a scuffle, which wasn’t too serious according to a source, but it was enough to leave the actor extremely annoyed. The Sun quotes landlord of the pub Mark Harris, saying: “[Goth’s] mom lives just down the road. She came down to see her mom and he tagged along. He did get a bit frustrated and there was a bit of a scuffle.”

A witness added to the newspaper: “No one could believe that a well-known Hollywood star had rocked up at a bar in dingy SE14. Everyone was getting their photos taken with him. The scrap all started when this guy took his hat. I think he was just joking, but Shia didn’t like it. The guy just took it off him and wouldn’t give it back. He tried to get it back and they ended up tussling. It was handbags”

The story comes just months after Shia had said he no longer wishes to live up to his bad boy reputation, telling Parade: “I’ve made mistakes along the way, but I’m learning,” the star said. “I’m more comfortable with myself [now], and I’m calming down. I would watch Steven Seagal movies and go into my room and try to beat my little teddy bear up, thinking I was him. And I would pull my curls back into a Seagal ponytail – which looked ridiculous, but I tried,” he recalled.