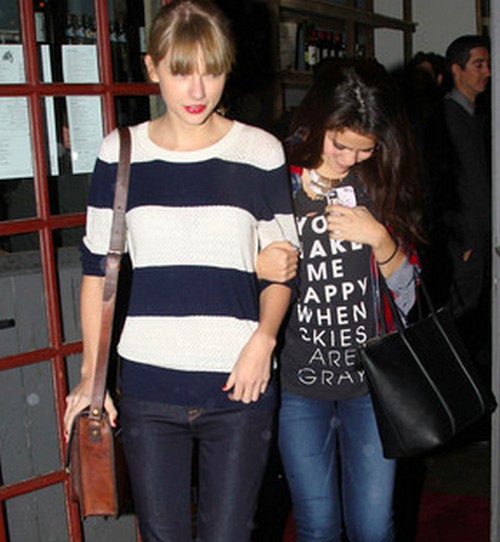 As we previously reported, Justin Bieber and Selena Gomez recently had a disastrous dinner date that ended before appetizers were even served. After the very public breakup, who better for Gomez to turn to than her bff/queen of breakups- Taylor Swift.

With such a public break up, it is good that Selena has such a close friend to turn to. She recently told Glamour about her friendship with the fellow singer by saying, “Taylor’s amazing. She’s so smart and sweet and humble—and she’s way more successful than I am! So when I see her after everything she’s been through and she just wants to go home and bake cookies with me, that to me is awesome.”

Before dinner, the two singers were at Conway recording studios in Los Angeles. The studio was also visited by both Miley Cyrus and Justin Bieber in the same day. While it is unclear which artists were working with who, it is known that Gomez showed up first, followed by Cyrus, then later that day Swift and Bieber popped in. Can anybody say new hit single in the works?

Swift and Gomez left together to head out to dinner, but later returned to the studio. Later that evening, Bieber and Gomez entered the Four Seasons Hotel separately. Oh, Hollywood.