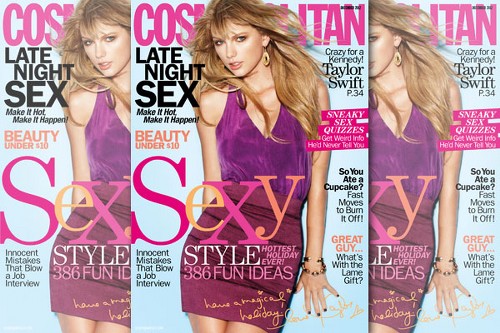 Did Conor Kennedy cheat on Taylor Swift? In December’s issue of Cosmopolitan, the country singer discusses her relationship troubles (assuming that she did the interview before she and Kennedy split), adding that she can not have a relationship where the other half takes constant distance, take the relationship backward instead of trying to move forward, and most of all, she doesn’t tolerate cheating.

In the newest issue, Taylor finally rocks something other than her obsession with red. See below on what she had to say on boys, relationships and on writing original songs for her newest record, Red.

On the playing-hard-to-get game: “I think a lot of times when you meet someone you feel like you need to appear like you’re not interested in them so that they’ll be more interested in you. But what happens when you start showing him that you actually like him? What’s he gonna do then? Play the tape forward; how do you keep a guy like that? I don’t want to sign up for that.”

On moves she won’t tolerate: “I can’t deal with someone wanting to take a relationship backward or needing space or cheating on you. It’s a conscious thing; it’s a common-sense thing. If I was in that situation, if I were them, would I be doing this to me? Would I ever do this to them? If the answer is no, then they’re not treating me fairly. I just don’t ever want to end up in a relationship that isn’t fair ever again.”

On the lyrics on Red: “I have a chalkboard in my house in L.A., and every week, I’ve been writing a new lyric on it from the record just to figure out which ones pop out to me, which seem most important. There’s a song that’s the first track on the record, and it says, “Love is a ruthless game unless you play it good and right.” That’s been my whole philosophy on love this whole time anyway.”