Taylor Swift Gushes About Bestie Selena Gomez: Together Through Good Times And Bad! 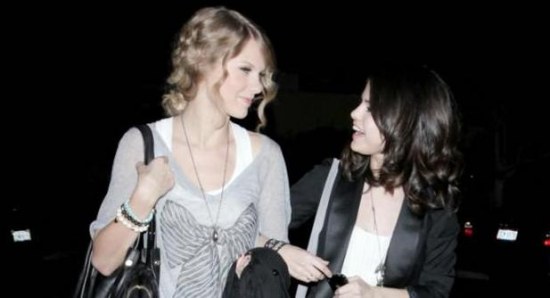 Taylor Swift may not know how to hold on to a man, but when it comes to friends, girl knows the routine! She and Disney star Selena Gomez bonded quickly, repressed by their good girl image, but set free by a love of music and song writing, it was a match made in celeb heaven! And as far as the whole ‘my best friend is also famous’ thing, it seems to be going pretty well for the two. They don’t get a lot of bad press, they both avoid scandal, and they both have a shining good girl image. Plus, they’re still super attached to their mothers. Only difference is that Selena is in a pretty normal relationship with Justin Beiber, and Taylor is dating (or isn’t she?) jail bait Conor Kennedy!

Taylor described their relationship: “Selena is one of my best friends. We’re there for each other for advice and late night fast food binges, through good times and bad. We really connect on a music level. We’re always playing each other’s new music. It’s so much fun to play her my news songs because she can tell me who each song it about without me even saying anything, and it’s the same thing with me!”

Ahh, but will Selena tell us who each song is about? Not fair! It’s great that they have someone to connect with like this, but I wonder, if they were normal, would they have anything in common? Both girls are constantly stalked by the paparazzi, and are always making headlines (like this one), but if Selena had two kids in Texas (as she recently said she would if she hadn’t joined Disney), and Taylor’s parents never moved to Nashville, would it still be kismet? Imagine the books they could fill about each others dirty secrets. Maybe someday they’ll fall out, a la Rihanna and Katy Perry, and then dirt will fly!