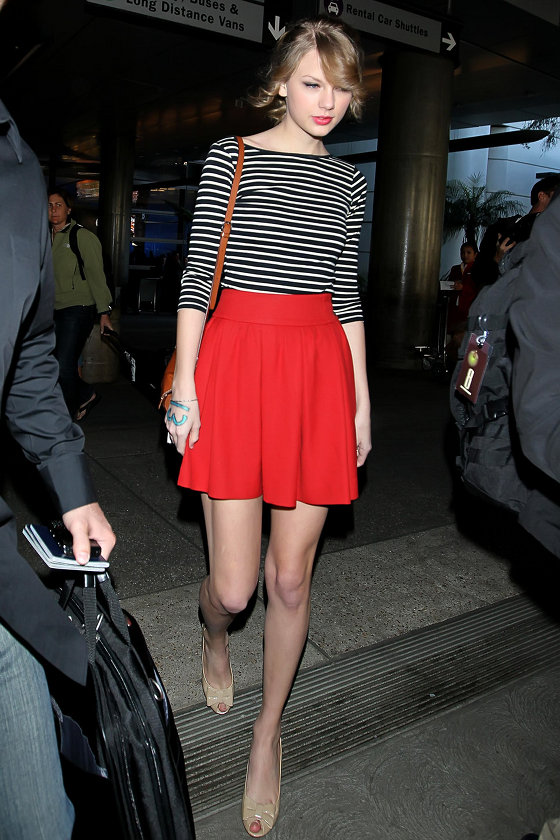 I am seriously disappointed with Taylor Swift! She’s always talked about how she doesn’t read gossip stories or magazines because it’s too stressful to hear all the lies printed about her, but Taylor may be eating her words now! The young and rich singer was interviewed by Harper’s Bazaar, where she explained, “I’m in a predicament where I can’t wear a dress twice or else it’s pointed out in magazines. So unfortunately I have to shop for dresses all the time.” Before you sympathize with Taylor’s dire need to shop, let’s break this down a little bit.

First: Taylor has said she doesn’t read magazines, so what gives? Apparently that’s a lie, because otherwise she wouldn’t know that the huge fashion faux pas of…gasp, repeating an outfit, is being talked about. (By the way, is it? I haven’t seen it. Although I did notice she wore her super cute kitty loafers more than once, which I appreciated!). One lie debunked.

Second: Who cares what the magazines say? Is it worse for them to notice she recycles clothes (just like 99% of the world’s population–and let’s try to remember that a lot of children and adults don’t have appropriate winter clothing or shoes) than for them to print that she is an attention seeking hussy who is incapable of sustaining a healthy relationship? Because that’s out there. Considering all the stuff they do say, worrying about their opinion of her fashion should be pretty low on the priorities list. Besides, she has a great sense of fashion. No fan will ever hate her for wearing the same dress multiple times, because fans repeat their outfits every single week.

Third: Kate Middleton repeats outfits. She is a Duchess, future Queen of England, super classy, and gets way more global attention that the Tennessee sweetheart. If Kate does, you can too.

Honestly, the more I think about this, the more upset I get! It’s so two faced and wasteful. No one thinks Taylor has a normal sized closet–it’s probably as big as my house, with wall of shoes arranged by color, and a special room for handbag and sunglass storage. But positioning herself as “poor me, I have to go shopping all the time for new clothes otherwise the magazines are a little bit critical” girl is infuriating! I give her no sympathy! In fact, I give her scorn! 0 sympathy and 4 scorn points! What do you think??