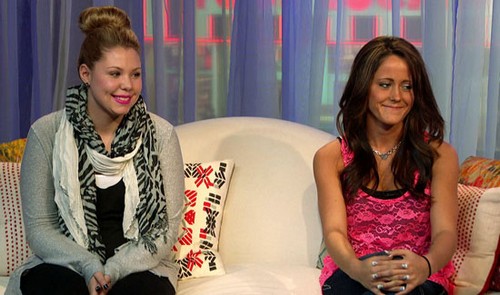 Celebs have always had to deal with their own share of haters and nowadays social networking sites make it super-easy to connect with those stars we love- or hate. The cast of Teen Mom 2 have seen and felt first hand what it’s like to put your life out there on display only to be met with harsh criticism and heavy duty backlash. According to Jenelle Evans, “If you don’t ignore it, it’s going to destroy you.” Still though, Jenelle, day after day continues to tweet things that either make her look pretty bad or else like an absent mother. I mean thanks to her Twitter we all know that she has the worst taste in men but still thinks each guy is a keeper, would rather shop then save money to fight for custody of her son and then there’s those naked pictures that her ex leaked. She seems to fall into the thinking that any publicity is good because it is helping to extend her fame which means more money.

On the other end of the spectrum is Kailyn Lowry who found herself obsessing over her Twitter account saying, “I would spend too much time looking at what people would say, until finally I was like, eliminate this.” the young mom then went on to delete her account to get away from all of the negativity. She seems to be the smartest one of the bunch.

Let’s face it, these girls became famous because their lives are messy and that’s interesting to watch. If you’re neglecting your child or continue to make the same mistakes, just with different people then there will be backlash. It comes with the territory. When you put yourself out there on display not everyone is going to like what they see!  Check out the video below and tell us your thoughts on the affect that social media impacts their lives!