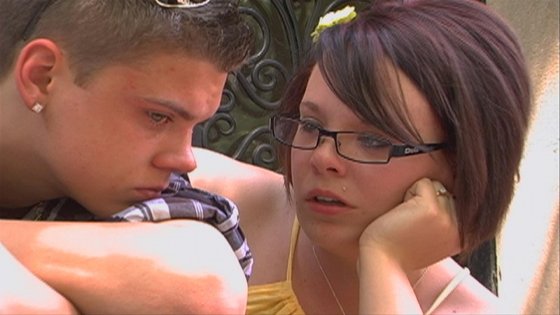 Fans of MTV‘s Teen Mom and 16 and Pregnant shows are still shaking their heads, wondering how the couple who put their baby up for adoption made it onto a reality series about the challenges of parenthood. After four seasons, the book is closed on the romance between Catelynn Lowell and Tyler Baltierra, but they live on in Twitter fame and reruns. Despite two years of planning to go to college and work as a child psychologist, Tyler has moved to New Orleans to peruse a career in acting.

Tyler moved to Louisiana last week, but he is feeling homesick already. He has been sending out mysterious tweets since the move, and I’m starting to wonder if he’s okay. I mean, acting is hard to break in to, and I’m betting it’s even harder in New Orleans, which is known more for it’s jambalaya and jazz than for it’s celebs! Check out Tyler’s tweets:

@TylerBaltierra: Happy Halloween everybody! I wish I knew why I felt so depressed lately #sadtweet #whatswrongwithme

@TylerBaltierra: I should not be up @ 3:30am this sleep pattern is killing me!#anxietyoverload #help

He was briefly able to cheer himself up by buying Assassins Creed 3, but then it was back to sad tweets. I don’t know how depression works, but it sounds like Tyler is having a rough week, at the very least! He and Catelynn are visiting next week, so he has that to look forward to. Still, I have to wonder, are these tweets exaggerated, or is his hashtag #help actually a #cryforhelp?