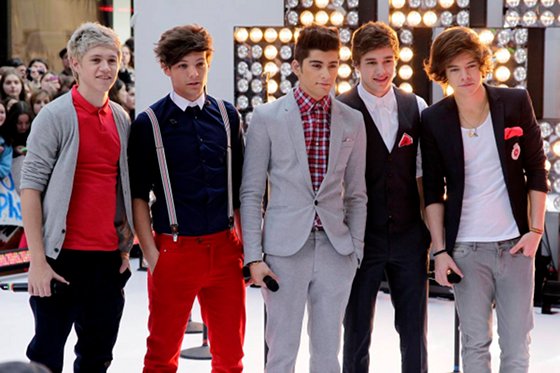 One Direction is currently the biggest boy band in the history of the universe after their stint on X-Factor UK shot them like a bullet into the stratosphere of fame. One would think that all of this quick fame and quick cash would go directly to their heads, but the guys from 1D say it isn’t necessarily true.  According to a new Teen Vogue interview, Zayn Malik, Harry Styles, Liam Payne, Louis Tomlinson, and Niall Horan are just regular blokes with a regular life. Right.

Niall admitted to the magazine that their sudden fame did not go to their heads. “What we do isn’t normal, but we’re normal,” he said. Harry also elaborated on this sentiment when he spoke about their One Directioners fan base, “Sometimes it’s hard to understand, because we’re just guys. We’re guys who would be at your school, who got this amazing opportunity.” Zayn, on the other hand, spoke to the magazine about how difficult it was to comprehend where they will be performing in USA next year, “We’re playing the Staples Center in Los Angeles. One of the first concerts I saw in America was there – Britney Spears – and I remember thinking, ‘This place is massive.’ Now we’re going to play there? I can’t wait!”

The magazine then shifted the focus to their personal lives and asked the boys if life had changed at all during the past year. Liam replied, “I still put on underwear every day,” while Louis responded, “There’s quite a lot of waiting around. So we often find the need to be a little mischievous. Like today, for example, Liam and I managed to get on the of [the photo studio], and we were hiding from everyone. We just try to keep ourselves entertained.”

1D might be the biggest boy band in the history of the universe, but according to the members of said group, life couldn’t be any more normal. We highly doubt that.