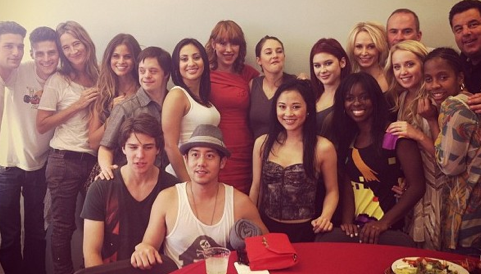 Filming for The Secret Life of the American Teenager has officially wrapped, and the cast posed for one last picture together on set in Burbank, Calif. on Monday (November 5). Star Shailene Woodley and other cast members took to Twitter to say their final thanks and goodbyes before leaving their characters behind.

Allen Evangelista, who plays Henry, tweeted, “Sad one chapter in my life is now over. But that chapter produced so many wonderful things, you can’t help but be grateful.” Renee Olstead, who plays Madison, added,  “Can’t believe that @ABCFsecretlife officially wrapped today 🙁 thank u everyone for 5 amazing seasons!!”

Megan Park played Grace, and she tweeted, “Today was officially the last day of filming Secret Life. What a crazy adventure. Thank you to all of you guys for watching all these years. We cried a lot of tears on set today but alas, its time to put these characters to rest. I hope you guys enjoy the final season. Xxoo.”

“Last day on secret life! so emotionally wiped out!!!” Woodley quickly tweeted out. And as for the controversial Adrian (played by Francia Raisa)? Even she will be missed. Raisa concluded, “And it’s a wrap on Adrian. Yes I was a crying mess yesterday standing in the high school hallway for the last time. Had so much fun playing her and growing with her. Def. going to miss it. On to the next one.”

Season five will serve as the final season of the series that airs on ABC Family. The show is mid-way through season five, with a special holiday episode premiering on November 19. The season will then pick up again on March 25 and run until the series finale on June 10.