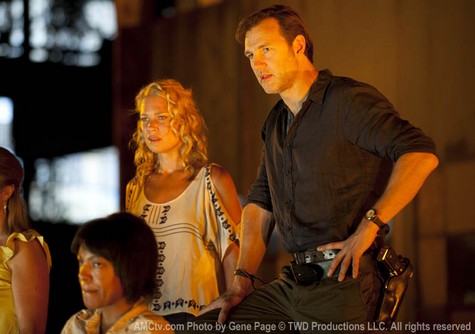 Tonight on AMC is an all new episode of THE WALKING DEAD called “Say The Word.”  On last week’s show Rick, Beth, Darryl and T-Dog went outside to clean up the dead bodies and look for Maggie and Glen to help, it turned out they were in the guard tower making out ’cause it’s important of course to get it on during a zombie apocalypse when everyone around them was dying! Rick and the group found the Governor’s compound, but before that they were taunted in a game of cat and mouse.  Did you watch last week’s season 3 episode 4? We did and we recapped it here for you!

On tonight’s episode after another loss, Rick struggles. Michonne remains suspicious of the Governor as he throws a party with a unique twist for the people of Woodbury. Three graves are dug which leads us to believe that Carol is in fact the third person that they will be burying, after all, it’s not like the group is going to dig a grave for Andrew the prisoner after he tried to kill Rick.

Tonight’s The Walking Dead Season 3 episode 5 is going to be exciting, and you won’t want to miss it. So be sure to tune in for our live coverage of the new episode of The Walking Dead — tonight at 9PM EST!