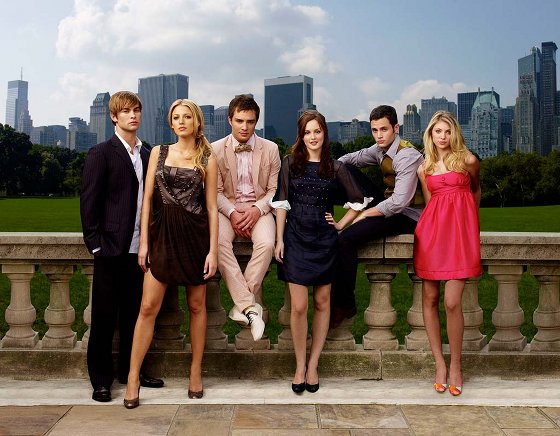 We’ve waited five long, grueling seasons, and with a final season of only 10 episodes, it’s only a matter of time before viewers find out who Gossip Girl is, and how she came to be! The mysterious character never appears on the show, despite Blair Waldorf and Serena Vanderwoodsen‘s best attempts to trick her into the open. The mysterious blogger has kept the series fresh and exciting, and has caused the characters to constantly turn on each other, paranoid. Kristen Bell, who just announced her first pregnancy with fiance Dax Shepherd, has spent five years in a booth doing voice over narration for the show, but last week she was spotted on location in NYC filming something!

Now, it could be a DVD edition extra, but the cast has whispered that we’ll be finding out who GG is, and to have Kristen play her in the last episode is too perfect! If she’d been introduced earlier, we’d have known right away (thanks to Google image searches), and as we’re all expecting it anyways, we’ll get to enjoy her character. I think she’s got to be a 25+ year old Constance alumni who had a scandalous something happen in college and was rejected to the life of a pasty blogger. But who knows? We have absolutely no way of knowing who her character is, or how she fits in! It could be a man! It could be Dorota!

It’s so sad to think that this is the final season of the fabulous clothes and locations of Gossip Girl, but I must admit I won’t miss the scheming. Sometimes it gets to be a bit much–like when something really, really illegal happens, and instead of phoning police, they decide to throw a dinner party and black mail the villain. But who am I to judge, this time next month I’ll be weeping sadly with the last flickers of my Jo Malone candle! Are you on the edge of your seat? Let’s all try to savor these last few weeks!