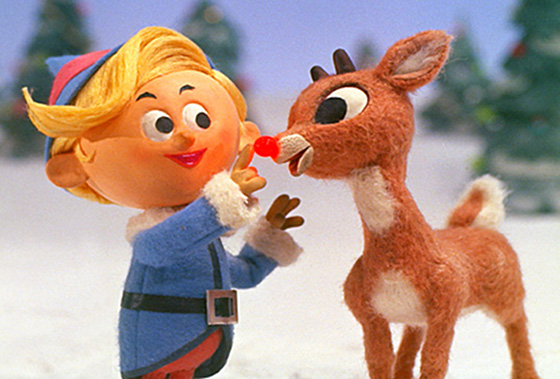 It wouldn’t be Christmas without Rudolph, right? Rudolph the Red Nosed Reindeer comes in at number 9 in our holiday movie countdown. The movie was aired in 1964 as a TV special based on the Johnny Marks song. It is the longest running Christmas TV special in history–it has been aired every year since 1964, and multiple times each year! It’s now considered a classic and was joined by A Charlie Brown Christmas and How The Grinch Stole Christmas in holiday fame. So why is it only coming in at number 9?

Rudolph The Red Nosed Reindeer is a unique story, to be sure! It adds a bunch of characters to the Christmas pack that were never even thought of before. We love Sam the Snowman, The Abominable Snow Monster, and Yukon Cornelius. The island of misfit toys is a great concept, but not all the toys are accounted for! We know the Charlie-In-The-Box is, by name, flawed, but what about A Dolly for Sue? I don’t know about you, but as a child I always wondered what was wrong with her! Producer Arthur Rankin Jr. described her flaw as depression–having been abandoned by her girl, she could not overcome the feeling of being unloved! How tragic is that?

We love the look of the movie, the character voices, and the songs. But it isn’t one of those holiday movies that can be played over and over–at least not for us! Instead, it’s a once-a-year tradition that we look forward to, but once it’s over, it’s over! Different versions show different fates for the misfits–sometimes they get rescued, sometimes not! And how could anyone not love the movie that produced the great quote, as Rudolph leaves the North Pole, “Goodbye, Cornelius. I hope you find lots of tinsel. Goodbye, Hermey. Whatever a dentist is, I hope someday you will be the greatest.” If you haven’t seen it, well, you definitely must! It’s a classic!