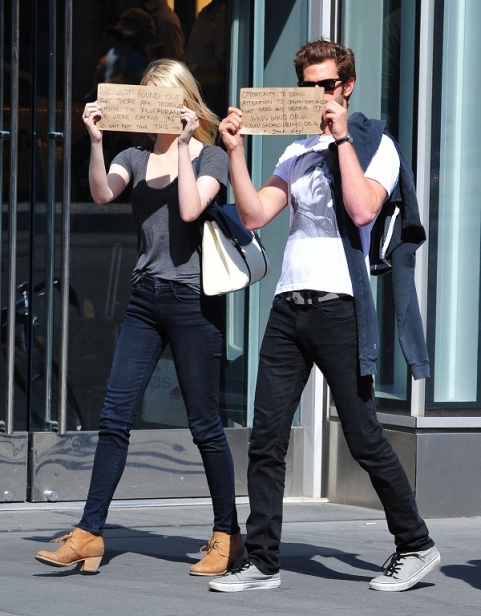 It might be official sooner than we think, folks! According to latest reports, Andrew Garfield (Mr. Spiderman) and his lovely GF, Emma Stone, might be expecting a baby! Okay, so before you kick us in the face and rub our hands on a furry wall, it’s not like a real, human, crying baby – it’s a puppy; a crying, barking, biting puppy. The couple made in La-La Land was recently spotted in Los Angeles shopping for their very own little cutesy dog to adopt and make their own.

The famous Los Angeles pet shop, Spot!, was the go-to place for the couple’s search, and while they spent hours upon hours rifling through puppies and breeds and puppy poop and urine breath, they eventually decided that the animal they wanted wasn’t amongst the crying orphans. Now, we never imagined Garstone – their collective portmanteau – to be dog lovers, but hey, once a dog lover, always a dog lover! Except if you like cats – then you’re just a slave to their fuzzy cuteness.

The pitter-patter of a four-legged pup is a much needed addition their family. The two met on the set of the new Spiderman movie – Garfield’s Spidey suit must have been the clincher – and they’ve been dating ever since. They’re a good fit. He looks brooding, dark, and intense, and she looks funny, vivacious, and spicy. It’s like a match made in Spiderman heaven. The two actors have had magnificent film roles during their short stint in Hollywood. He shot to fame in the independent and critically acclaimed Boy A, while Stone truly became a household name after the acerbic and sardonic comedy Easy A. (Hey, how serendipitous is that? Both shot to fame in “A” films!)

Ultimately, a puppy should bring great joy to the happy slappy couple – except if they’re actually cat people and lying to us all along.

They’re not pregnant. They’re just in love with puppies. Don’t spoil it – or soil it.