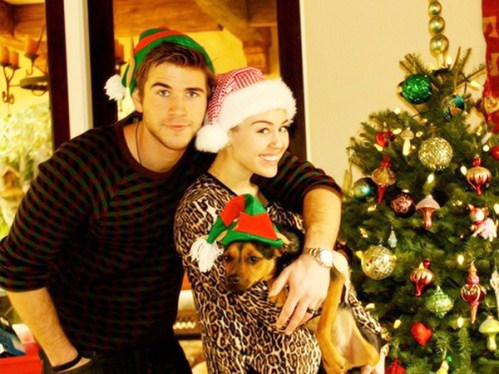 On the 26th of December, Miley Cyrus posted a Christmas-themed picture with fiancé Liam Hemsworth. In the image, the two celebrity lovebirds sported what looked like wedding rings and this sparked rumours that the two were secretly married over the Xmas holidays. It’s a valid theory, but is it true? According to insiders, the wedding rings aren’t really wedding rings; they’re just matching bands that show the couple’s commitment to one another. They are engaged, so a secret eloping is not too far from the truth.

This isn’t the first time the celebrity couple experienced marriage rumours. In June, Hemsworth made a comment and said, “Now we’re married.” He rapidly corrected his faux pas and said, “Well, not married yet but we will be.” This sparked an all-out gossip war on the internet, with thousands of websites and blogs clinging to the verbal faux pas like flies cling to dog poop. It was soon proven to be just that – a mistake, a slip of the tongue, a Freudian slip, and whatever else you wish to call it.

This latest image is doesn’t prove anything. If Cyrus and Hemsworth were wed, we would have already experienced thousands of reports that the two were married. It was a harmless picture that was once again taken out of context by gossip mongrels. In fact, earlier this year Cyrus noted that she wasn’t in any rush to walk down the aisle and that she already “felt married”. Therefore, in conclusion, these marriage rumours cannot have any veracity to them.

Do you think Cyrus’ wedding will be the wedding of the century? Do you think she will have a superstar marriage? Do you think the two married secretly over the holidays? Why don’t you let us know your thoughts in the comments below, Celeb Teen Laundry readers?