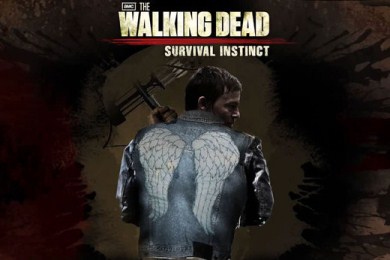 The next game in Celeb Teen Laundry’s Must Have Christmas Countdown is a brand new zombie shooter for those zombie Apocalypse lovers. Six months ago, gaming company Telltale released the episodic Walking Dead video game. It was one of the greatest gaming experiences in recent PC gaming history, and heralded in a new era of emotion-driven game play that focuses more on the characterization and the story than the garden variety zombie fare. The fifth and final episode of Telltale’s masterpiece was released a few weeks ago to critical acclaim.

However, the Walking Dead franchise does not die that easily. Instead, the Walking Dead gaming idea was brought back from the dead and revamped by gaming company Activision. The new game, Walking Dead: Survival Instinct, will be released on the 11th of December – just in time for the Christmas holidays.

In this new take on the franchise, players won’t be experiencing an emotive and dramatic narrative, they will, instead, take on the role of the heart-of-gold character, Daryl Dixon, in a prequel narrative. Unlike its predecessor, Telltale’s Walking Dead, this one will have gamers star in their very own zombie First Person Shooter. There are only short, succinct snippets of information on the new game, but according to most reports, players will have the choice to either attack zombies and/or use stealth to avert the attacks. The player will also gain new party members throughout the linear storyline and will be able to choose which characters they want to keep in their fight against the zombie Apocalypse – all of the party members will have specific advantages and disadvantages that could either make or break the player’s survival, very much in the vein of old-school RPG’s like Final Fantasy.

There’s no word yet on how detailed and impressive the game might be, but Robert Kirkman, the creator of Walking Dead, already said that an FPS (First Person Shooter) would be absolutely “pointless.” The Walking Dead doesn’t thrive on action and gory set-pieces; it thrives on a subtle and emotional narrative of humanity’s instinctual fight for survival. Therefore, a game that follows the linear narrative and gaming experience of a regular shoot-em’ up, will become void and redundant in the grand scheme of things. We already have enough excellent zombie games to last us a lifetime, so we doubt The Walking Dead: Survival Instinct will be able to bring anything new and novel to the zombie gaming arena.

If you’re still interested in playing this game, check below to see whether it will be released on your platform and when you’ll be able to buy it!

25 Days of Christmas: Winter Night On The Town At A Holiday Movie