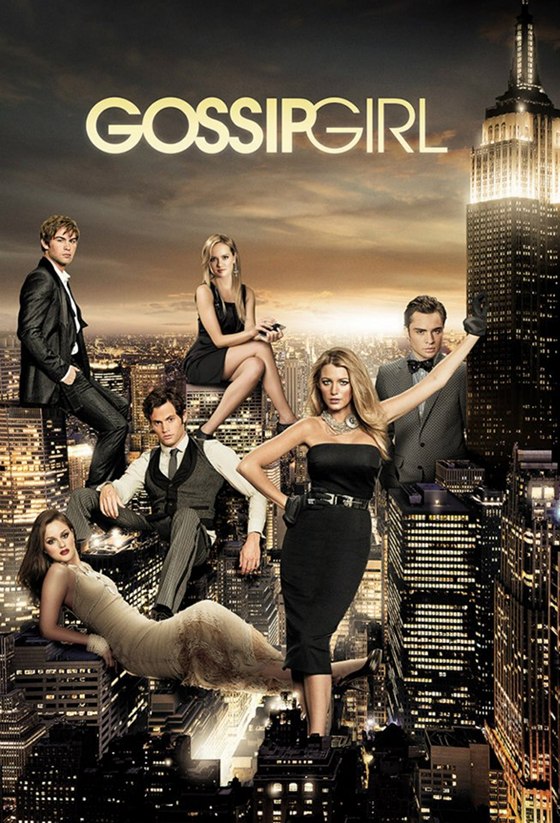 This time last week, I was a nervous wreck trying to speculate how the epic finale of the six-year-long show Gossip Girl would be wrapped up in a 43 minute time slot. A few months ago, we reported that Kristen Bell, who has always done the voice over for Gossip Girl, was spotted on location in NYC filming with the cast. So, of course, all season we’ve been waiting to find out when they’d introduce Kristen Bell, who she’d play, and how the Gossip Girl unveiling would play out. But we didn’t hear a peep about the identity until tonight! Spoiler alert: The text below is a no-holds account of the series finale of Gossip Girl. If you haven’t seen it yet, don’t read! Go to CW’s website, watch, then report back here and contribute to our discussion!

We finally saw Kristen Bell, but in a cameo! After commercial break, we see her speaking the typical Gossip Girl lines, but the camera zooms out and she’s reading lines with star of The OC and Heart of Dixie, Rachel Bilson! Rachel is an aspiring actress who is auditioning for a new movie about a mysterious NYC blogger. Kristen winks and the show resumes. Sneaky sneaky and touche! We love/hate/love/hate/LOVE the trickery! Of course we all jumped on Kristen in NYC, and they one upped us! This is the stuff that makes great television!

After years of absence, will we see little Jenny Humphries and Eric van der Woodsen? Last we heard, Eric was at Sarah Lawrence for college, and Jenny was pursuing a hardcore fashion career in London (Taylor Momsen, who plays her, actually left the show to perform a style of music so intense that I don’t think it has a name–but she looks cool doing it!). Well, in the 5 years later montage at the end, we see the whole family, Eric and Jenny included! Yes–we see our GG cast in 2017. Blair and Chuck are happily married with an adorable, tux wearing son called Henry, who is looked after by the doting Dorota. Nate has turned The Spectator into a successful business complete with private jet, and is running for mayor of NYC. Lily is back with Dr. van der Woodsen, Rufus is with a mysterious artsy woman, and Serena and Dan are getting married.

So who is Gossip Girl? Well, in a plot twist as intricate as anything JK Rowling could write, it is Dan Humphries! Yes, Lonely Boy saw Serena at a party he was accidentally invited to and fell in love. He was desperate to get into her world, and so like any true writer decided to write himself into it. He created Gossip Girl and ran it based entirely on tips until she returned from boarding school, when he started to write original posts about himself. Jenny knew the whole time and approved everything he posted about her. He closed it down, but Georgina stole it and he knew he had to steal it back. Now that Dan is done, GG will live on through someone else’s fingertips–she is an entity that can not belong to a single person!

It’s been an emotional night. Now that the series is over, I’m watching the first episode on Netflix (oh, so much has changed!) and will probably buy the entire book series tomorrow to quell the thirst for Upper East Side dirt. Of course, I’ll be talking with my sources to get you the latest news about any Gossip Girl spin off series, so stay tuned! What did you think of the series finale? Anything you wanted more of? Are you happy with the GG unveiling?