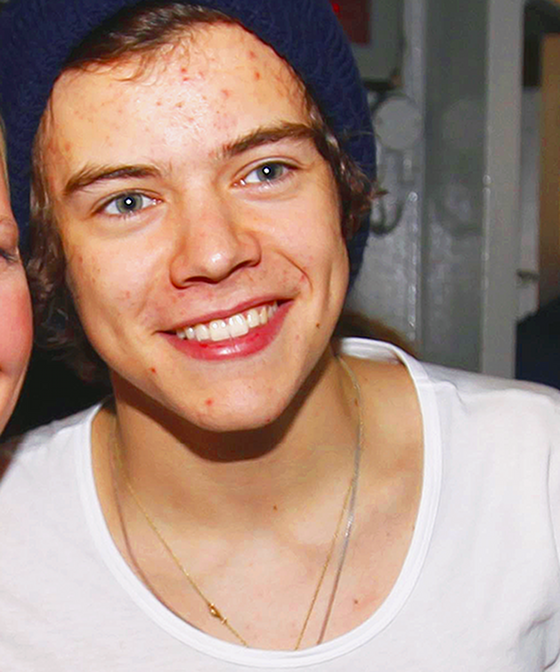 If you’re human, you’ve dealt with acne in some form. As far as I can tell, it serves no evolutionary purpose. It doesn’t help with life-saving adrenaline, or even help attract a mate. In fact, it makes people feel awkward and want to self isolate. Thanks to modern dermatology, skin enthusiasts can purify with a huge range of products and procedures. These may be too pricey for us commoners (or anyone who doesn’t have a personal staff of beauticians on staff 24/7), but Harry Styles has an estimated net worth upward of $10 million. So what’s up with his acne explosion?

Star Magazine called him a breakout star in print edition January 7, 2013, citing his awful skin and wondering what is causing it. They even consulted with Dr. James Marotta, who says the visible parts are symptomatic of even worse things! “A good start for Harry would be a short course of antibiotics, a facial with extraction of clogged pores, exfoliation with either microdermabrasion or a light chemical peel, and topical Retin-A.” So why doesn’t he get on it? This isn’t the first time his personal hygiene has been examined under the microscope–he’s struggled with his skin all year. But with fleets of dermatologists available, and I assume they’ve been deployed by One Direction management, he can’t beat it!

All that to say, it happens. I mean, Harry is barely old enough to drive in the US. He’s a kid. He would be getting ready to graduate from High School if he lived over here and was a normal kid. So, dare I ask that we all leave Harry alone? And maybe the next time you’re spreading a DIY mixture of toothpaste, egg yolk, olive oil, and avocado across your forehead, you’ll remember that even Harry Styles, one of the most eligible bachelors (if you subtract his romance with Taylor Swift) in the world, isn’t perfect!