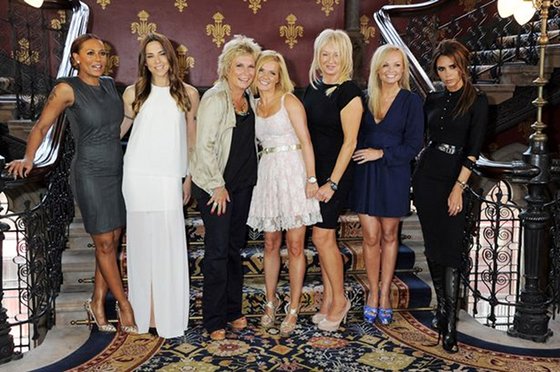 Why oh why isn’t this opening in Seattle? Or as a PBS special? As any true lover of the Spice Girls knows, Jennifer Saunders has adapted the songs into a kick butt musical. The story line goes something like this: a group of girls wants to be a girl band. Right? Don’t you just love already? Jennifer, who I may accidentally call Edina from her historical days on Absolutely Fabulous, penned the musical, which opens tonight in London’s West End theatre district.

“I was basically the sixth member of the band. We used to travel around everywhere to see them and they were so great with my kids.” So when the incredible actress heard a musical was in the works, her “first thought was that I really, really had to do it. The thought of a Spice Girls musical written by somebody else was not acceptable. Because I was so close to them, I couldn’t let it slip through my fingers.”

So what should we expect from the musical? Saunders explains: “The best thing about them is you could go to see one of their shows and take a child or your grandmother and everybody would enjoy it. They had incredible universal appeal. They were never over-sexualized. Yes, they were fun, naughty and bad but in a fun way. I knew the musical had to have that running through its veins. It needed to be about fame and take in their stories and be a lot of fun.”

Saunders loves the Spice Girls and trusts that they’ve written a show that really will have universal appeal. “I want this to hit the target audience. I want it to have a broad spectrum of viewers. A friend of mine brought her 73-year-old mother the other night who has never really heard a Spice Girls song and she cried all the way through. So that’s a good sign. People don’t actually realise how incredible the Spice Girls pop songs were. They are genius.”

If and when Viva Forever goes on the road, would you pick up tickets?