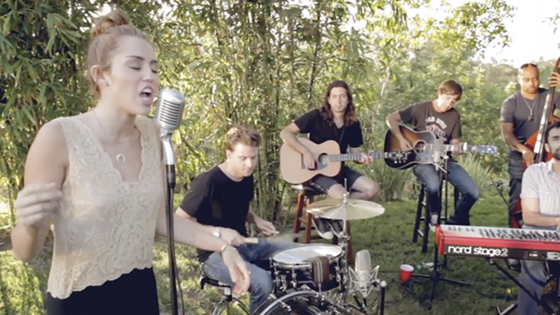 Happy Holidays from Miley Cyrus! The young singer/actress has been keeping her professional career on the down low, hinting coyly at new music and a 2013 album, but we never thought she was hoarding more of her music from last summer’s Backyard Sessions.

Last night, Miley released a cover of godmother Dolly Parton‘s hit song Jolene, which originally hit airwaves in 1974. In the song, Miley begs Jolene not to take her man–and we’re choosing to take the high road and not apply it to her relationship with fiance Liam Hemsworth. The song is really old–pre Miley Haircut–so we’re pretty sure it’s just an innocent cover of a catchy song!

Miley has been dancing with the wilder side of life, celebrating her birthday with strippers and spending Christmas with a sex blow up doll, but that doesn’t mean she doesn’t have a good heart. The young star has promised a new album in 2013, title and date are yet to be announced. If this is the sound Miley is going for, I may actually buy the whole album! Do you like Miley’s change of pace?

An unconfirmed source promises there will be one more song in the Backyard Sessions series, after which we will expect a no-holds announcement about her next album. Of course, whether it includes a world tour will depend on when she and Liam set a wedding date…check out Jolene below and tell us what you think of the acoustic side of Miley!