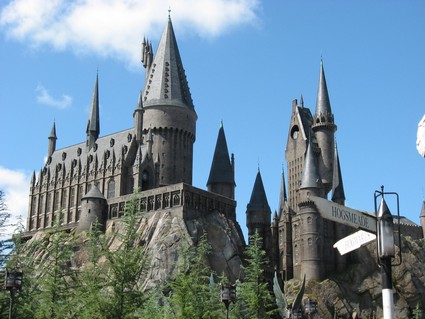 This. Is. Fabulous. Seriously, who would have ever thought more Harry Potter was coming? We’ve been so obsessed with Fifty Shades of Grey production, a Twilight spin off, and The Hobbit premiere, that we forgot Harry! Well he is forgotten no longer!

A source confirmed to The Sun, “The cast have really enjoyed getting back together — they are so tight-knit. The shooting schedule is nowhere near as long as the films, so though filming has been intense, the stars have enjoyed being able to pop in and out.” Wait, wait, wait. We’ve missed something! Where does the plot come from? What should we expect? JK Rowling hasn’t penned a new novel and forgotten to tell me, right?

The new film is a mini movie and will be played exclusively in the Harry Potter theme parks. I know! But that doesn’t affect our question: what will the movie be about? Will it follow a previously ignored story line? We know Helena Bonham Carter is in it (AKA Bellatrix Lestrange) so it’s got to be pre-end of the seventh book.

Of course, we expect some fabulous person will boot leg it and put it on YouTube for those of us who can’t make it out to Florida, but that doesn’t satiate the thirst for more! What do you think will be in the mini movie? Could this be the real end of Harry Potter, or do you think JK will write a new one?