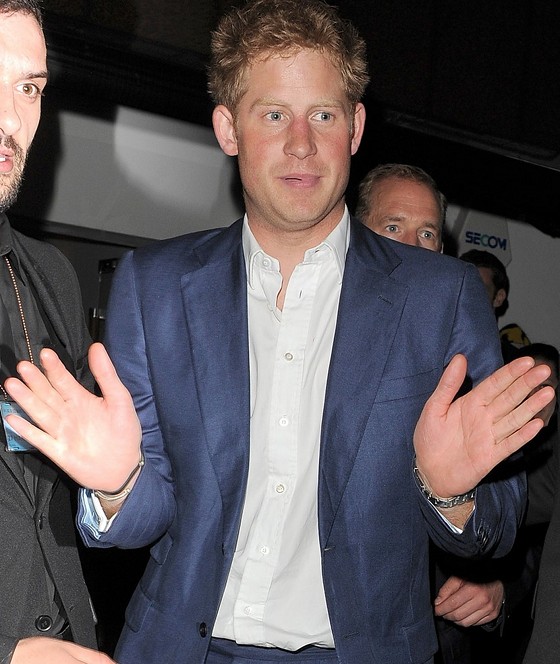 Let this be a lesson to you: don’t do things you wouldn’t want the world to know about! Seriously, people! Playboy Prince Harry is poised on the edge of yet another PR cliff, and it may be his ex girlfriend Mollie King who pushes him over the edge. The third in line to the throne is known for his wild and alcohol induced escapades, most recently last summer, when he got naked at a party in Las Vegas. It doesn’t seem like a hard lesson to learn, but Prince Harry just can’t remember to keep it in his pants and out of range of cameras! But his next big scandal may see him more innocent than previously, because it will come in the form of an ex girlfriend getting too loose lipped on camera!

Harry dated Mollie earlier this year, and now that she’s landed her own reality TV show, he’s terrified she’ll open her big gob! The singer and her band The Saturdays will be on E!, shown trying to make it in America. Producers are hoping to milk her royal connection to help ratings. “Producers think Mollie would be ratings gold if she talks about Harry,” a source reported to Star Magazine, print edition Decemebr 31, 2012. “They provide the girls lots of alcohol to get them gosisping about their love lives.” But Mollie is smarter than that, right? I mean, she will remember she is on camera and keep her cool, right?

Wrong! Mollie confessed, “You kind of forget that the crew is there and start talking about quite personal things, like sex and stuff.” Hurrah! It’s been too long since a royal friend turned fame whore let loose! A royal spy is worried about the affect of the show on the royal family though, and confesses, “They think Mollie has secrets that could take down the palace. A royal scandal would generate huge ratings for the show, but Harry has begged Mollie to keep her posh mouth shut.” Which makes the lesson of this story: Don’t do bad things! Seriously guys! You never know where you’ll be in 5 years, or who will have a grudge. People spread nasty rumors and gossip, so stay out of it–keep your hands clean! Do you think Harry will ever learn his lesson, or does he need yet another PR scandal to help him remember his royal manners?

Taylor Swift and Harry Styles Taking A Break For The Holidays

Gabby Douglas’ Biography Tells A Story Of Courage And Determination