Taylor Swift and Harry Styles- The Truth Behind their Romance 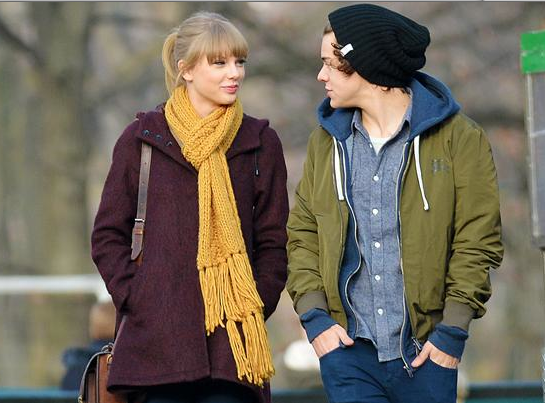 If you have not already heard, the newest boy toy in Taylor Swift’s long line of suitors is none other than the infamous bad-boy of the widely famous boy band, One Direction– Harry Styles. While Styles is perhaps the best-known member of the 5-person group, he may best be known for his love for women- and lots of them. But it turns out that Styles may be settling down with the recently single 22-year-old country songstress.

The two singers were spotted on a romantic date in Central Park in New York City on Sunday (December 2), where they looked very happy and were rumored to be making their public debut as a couple.

Now, the most recent reports are questioning when this budding romance first began. Perez Hilton is claiming that the spark may have been set by a scandal. The website is claiming that Swift and Styles first started seeing each other in the late summer. At the same time, Swift was dating high school student, and Kennedy family member, Conor Kennedy. Even if she did not cheat on Conor, Taylor and Harry are quick to make their public debut, with Conor and Taylor only splitting weeks ago.

While PerezHilton.com thinks that the quickness of the relationship can be blamed on it being secretly started months ago, HollywoodLife.com claims the whole thing is a fabrication. The website, which is notoriously often incorrect, stated that “Swift is faking her relationship with One Direction member Harry Styles in an attempt to make ex-boyfriend Conor Kennedy jealous and hopefully push him back into her arms!”

While Swift does seem to be a bit of an over-emotional 22-year-old romantic, even I think she is above this. I do not think one of the most successful singers in the world, who also happens to have an all-star lineup of ex-boyfriends, would have to worry about making her 18-year-old high school ex-boyfriend jealous.

What do you think? Did Swift either cheat on Conor, or make the relationship up? Or are Harry and Taylor really just into each other?

25 Days of Christmas: Winter Night On The Town At A Holiday Movie