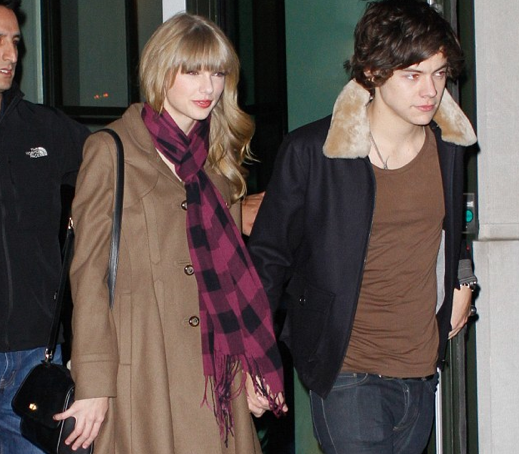 First seen together on the set of “The X Factor” last month, then seen in Central Park last week as well as leaving each others hotel rooms throughout the week, Taylor Swift and One Direction superstar Harry Styles have caused many rumors with their romance. Friday night (December 7) while at the Z100 Jingle Bell Ball at Madison Square Garden, the rumored couple not only walked separately, but Swift skipped all interviews.

In an attempt to get the relationship confirmated by Styles, one interviewer questioned the 18-year-old about the last romantic thing he did. As Styles broke out in a shy smile, he was quickly whisked away by his rep. In a hope for more information, reporters turned to Styles’ bandmates, Louis Tomlinson, Zayn Malik, Niall Horan and Liam Payn for information.

Tomlinson told The Huffington Post backstage, “I’m happy that they’re good friends. I’ve met [Taylor] before and she’s a lovely girl.” With no further information about the couple, people kept their eyes peeled backstage for the two singers’ interactions. According to The Examiner, the two were very affectionate offstage together. Harry also spent the majority of the time in Swift’s dressing room when his band was not performing.

After the show, the pair left together for London yesterday (December 8). Taylor flew Harry to London in her private jet, leaving the rest of his bandmates to fly domestically.

Taylor recently talked to British Cosmopolitan about her past relationships and how she hopes for a longer lasting relationship in the future. She admits, “I’ve never had a really long relationship, so I have no idea what that’s like,” she explains in the January issue. “Wish me luck for the future!”

The singer, who will turn 23 on December 13, also shared that age does not matter to her. She shares, “I really don’t have any rules about dating when it comes to height, age, career choice, anything like that.” Though she is now going for younger boys, Swift had a short relationship with 35-year-old John Mayer. She admits, “It’s really more about strength of character. When it comes to age, I’ve been all over the map.“

So with Swift wanting to move into longer lasting relationships, will her and Harry be together for a while? Only time will tell.