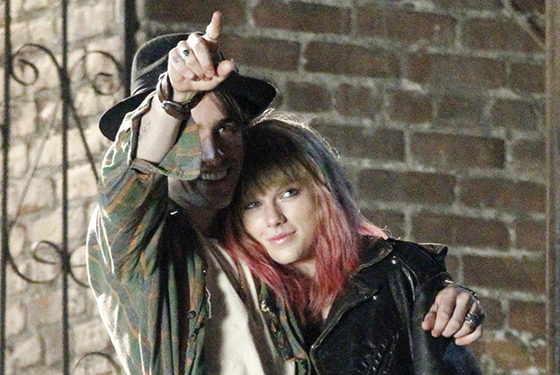 Could you keep a straight face watching that? Taylor Swift‘s 23 video was released today, on her 23rd birthday, on the 13th day of her favorite month. You’d think that with all those overlapping numbers she’d put out something really stellar right? Well, Taylor’s creative team decided to go in a different direction. You know how we’ve all been half mourning half celebrating the end of Twilight and buzzing about spin offs? Well, they brought us the Twilight spin off! Just replace Kristen Stewart with a punk wannabe Taylor, replace vampires with punk hipsters who attend raves on abandoned fields, and extend the opening monologue at the beginning of the movie.

If you had trouble following that, click right here to see the video on MTV, where it premiered a few hours ago. The video shows Taylor with grungy hair and tight jeans, lamenting the loss of her fast-life rebel boyfriend, who cheated and left her passed out in a corn field. “I think when it’s all over it all comes back in flashes…it’s a kaleidoscope of memories. It all comes back. But he never does. I think part of me knew the second I saw him this would happen. It’s not really anything he said, or anything he did. It was the feeling that came along with it. Crazy thing is, I don’t know if I’m ever going to feel that way again. But I don’t know if I should. I knew his world moved too fast, and burned too bright. But I just thought, how can the devil be pulling you towards someone who looks so much like an angel when he smiles at you. Maybe he knew that, when he saw me. I guess I just lost my balance. I guess that the worst part of it all wasn’t losing him. It was losing me.

I’m sorry, but that is almost word for word the prologue to the first Twilight book. Am I right? I mean, not literally. But it’s could be applied completely accurately to Bella Swan‘s obsession with Edward–his world moved too fast, I lost myself, he never comes back (for New Moon). I honestly hate it. Are you into her new look in the new video? Do you wish she stuck to singing, or does her artsy prologue have merit?