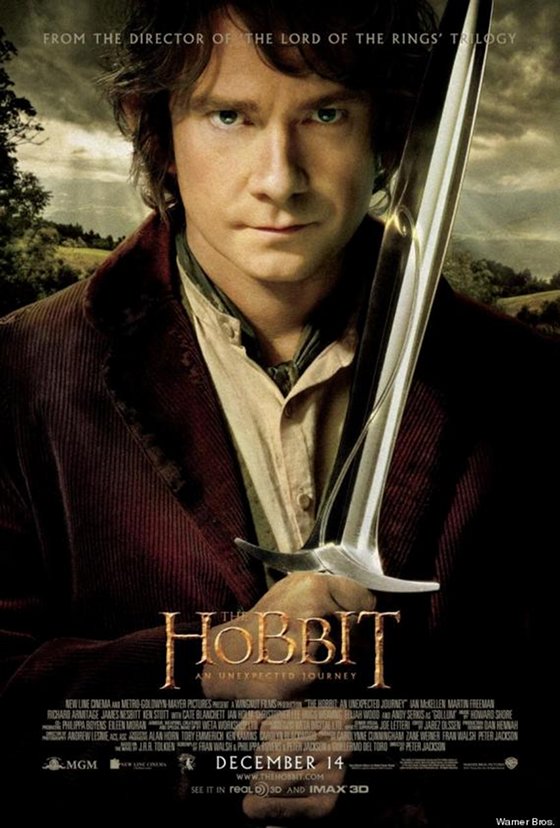 Be still, heart! We are eleven days away from achieving inner peace–a state that can only be brought on by a midnight viewing of The Hobbit: An Unexpected Journey! Our tickets are purchased, but that doesn’t mean we’re content to quietly wait for the release! A TV trailer was released for the movie, and in it we catch a glimpse of Smaug. For those of you who are trying to figure out how the book will be divided to make three movies, and what info will be used from the appendices, calm down. The 2 second scene with the dragon appears to be a flashback of the fall of Dale, as told by Thorin.

We’ve already learned (spoiler alert–if you haven’t read the book, close your laptop and go do so! Immediately!) that the movie will show Gandalf‘s fight against the Necromancer (AKA Sauron), and Christopher Lee (who played Sauramon in The Lord of the Rings Trilogy) will be in the new film series. We expect to see a lot of The White Council, a group of wizards and elves who will vote to expel the Necromancer from Dol Gulder. Whatever happens, there will be a fight more epic than Gandalf vs. Sauramon in The Fellowship of the Ring.

So what are your expectations for the next big trilogy? Have you read the book, or are you going in blind? How many times will you see it? Check back with us early on Friday for our thoughts on the movie: spoiler alert, I’ll probably give it five clothespin, and my only complaints will be “not long enough,” or “the people sitting next to me.” Check out the new trailer below!

Taylor Swift and Harry Styles- The Truth Behind their Romance