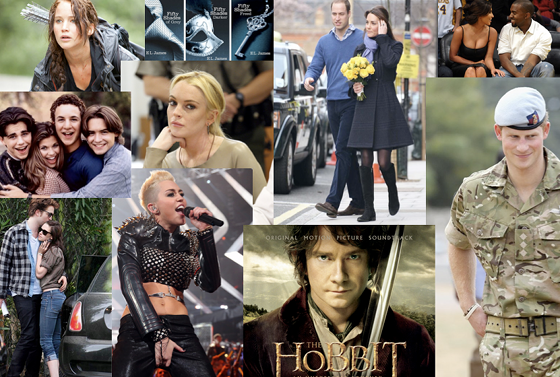 2012 has been a crazy year, even by our standards! And though the specifics may be lost to time, we’re here to remind you of all the awesome stuff to come. Yes, here it is! Our top ten countdown of awesome (and slightly cringe-worthy) things to look forward to in 2013!

10. Lindsay Lohan’s continuing court drama: This time last year, we though Lindsay was making a comeback. She was in talks to play Elizabeth Taylor (which she did–talk about a huge flop!), thanked Judge Stephanie Sautner for saving her, and booked Saturday Night Live (also a flop, but you could tell she was trying hard!). Then it all went south. Now she’s back in court, fighting for probation violation, a hit and run, and possibly a Lifetime lawsuit for driving while filming, which violated her contract. We hope this will be the year that Lindsay cleans up her act, but don’t put your money on it. Either way, we’re sure to get a dozen new court outfits, excuses, and exasperated eye rolls from her legal team.

9. Boy Meets World Disney channel spin off: We’ve been Girl Meets Worldcentral here at Celeb Teen Laundry. Boy Meets World was a defining part of life in the 1990s, and thanks to reruns, a new generation has fallen under the spell. We’ve told you it’s starting filming early this spring, and a few days ago Ben Savage himself responded to this tweet “Hurry up and start your new series so I can fall asleep better at night!!” with “We’re almost there :)” Though it won’t be an exact BMW clone, our favorite cast members are returning for some PG rated family fun, and we can’t wait!

8. Kristen Stewart’s next big blunder: Last summer, Kristen shocked us by cheating on her dreamboat costar (and British hottie extraordinaire) Robert Pattinson. She’s been brazenly unapologetic about the whole thing, and we can’t wait to see where her selfish ego leads her next! It’s too soon to say if it will be another affair, a Snow White and the Huntsman sequal worse than the first, or 365 days of greasy hair and red carpet nudity, but there will be drama, for sure! We just need to sit back and wait for it.

7. Kim Kardashian and Kanye West’s baby: Last night, Kanye made an announcement in a classless way that only Kanye can do: he and Kim are expecting. Gag. Kanye called out to Kim during a concert, calling her his baby mama–which didn’t thrill Kim! Since then, we’ve learned she’s 12 weeks along, which means six months of leather maternity wear, Khloe Kardashian fertility woes, and weird baby names. Think about it–Kimye is a boy and girl name. Fits either way! Only thing up in the air? Whether Kim’s pregnancy will earn its own E! series, or just a 4-hour long special.

6. The Hobbit Movie, part two: I know, I know–the Hobbit has only been out for two weeks, but loyal JRR Tolkien fans are already queuing up for part two. The trilogy division is painful (at best) and the major cliffhanger ending has us all writing in agony. It’s top three for most exciting movie premiers next year, especially now that Twilight is finito.

5. Miley Cyrus’ new album: Miley has been all over the place this year–she got engaged, cut off all her hair and went blonde, and groped a stripper at her birthday party–but next year will be even more crazy. Miley has been working on her new album for ages, and based on the teases we’ve heard from her Backyard Sessions, we can’t wait to hear her new sound! Of course, we’ll also be on wedding watch, but who knows if that will be in 2013!

4. Prince Harry’s return from combat in Afghanistan: The news has been dull without playboy Prince Harry to spice it up, so we can’t wait for him to finish his tour in Afghanistan with the British Army and return home. He’s been in quite a dangerous situation, so we’ll be happy to have him home safe. Of course, we’re also hoping he’ll go and let off steam in Vegas again. There’s a lot of depressing news out there, so Harry really should consider it his humanitarian duty to bring a smile to people round the world with another partying scandal!

3. Fifty Shades of Grey cast announcement: The internet is buzzing with rumors and polls about who will be cast in the much anticipated film adaptation of the Fifty Shades trilogy. Our favorites are real life couple Ian Somerhalder and Nina Dobrev, but we don’t expect to hear about it any time soon. E L James has confirmed that a lot of behind-the-scenes stuff has to happen before anyone even thinks of casting–but you can bet it will be A-list hotties. At this rate, we don’t expect a 2013 release (boo) but the suspense will just make it all the more satisfying!

2. The Hunger Games Catching Fire release: After the smash hit book series took off in classrooms and on Kindles, the movies were set up for equal success. Last March, we all fell in love with Jennifer Lawrence as Katniss Everdeen, and next November we’ll get to see revolution brew and sizzle in IMAX! All seemed well at the end of the last movie, but readers know that the trouble is only just starting! It will be a midnight premiere sort of movie, for sure!

1. Kate Middleton’s royal baby: How could it not come in as the most exciting event of 2013? After a decade long romance, Kate and Prince William are finally expecting, and the news has thrilled the world. Yes, Kate’s been sick with hypermesis gravidarum morning sickness, but with the best royal handlers, we know she’ll give birth to a beautiful, healthy baby. We have at least 6 months of maternity fashion, baby name debate, and royal tradition breaking to look forward to!

2012 has been great, but we’re ready to kiss it goodbye and welcome the new. What are you most looking forward to in the new year? Is there a celeb event that didn’t make our list?