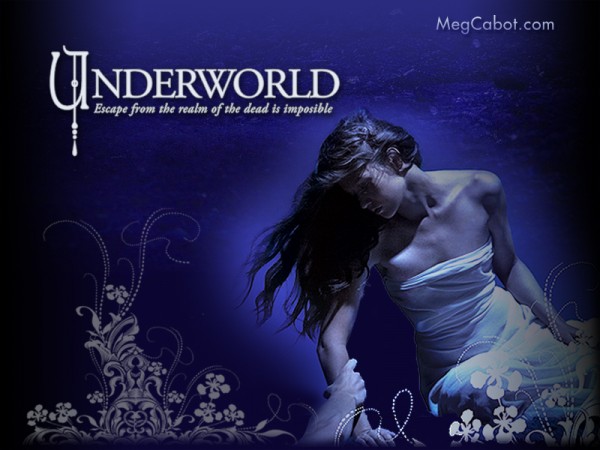 Underworld is the second installment in Meg Cabot‘s Abandon trilogy. You can read our review of the first book, Abandon, by clicking here! The books are definitely meant to be read in sequence, so be sure to do so, or you’ll be totally lost within this topsy turvy plot!

Underworld picks off a few hours where Abandon ended. We meet up with Pierce and John in the Underworld, and find out what Pierce’s future will be, based on her decisions and the laws that govern the land of the dead. But can Pierce let her family go on without her? Well, no. She can’t–and, as you might expect, her desire to help them messes everything up. Again.

Much like the Abandon, Underworld moves at lightspeed, telling the events of a single day. Though it’s longer than the first book, it feels shorter when read. I think a lot of readers take umbridge with the time frame, but ultimately you’ll just have to take it or leave it! I think the story is unique, the characters fresh, and the writing impeccable. But that’s not to say the book is perfect!

What I liked:
We learn more about John’s mysterious past, and it really helps to make him a multi dimensional character (no pun intended!). In the first book, John is sort of a blank; we know he’s a tall, intimidating guy with long hair and a unique job. But we don’t get into who John is, or what’s underneath that grunge hair! In Underworld, we find out John’s big secret, and get to see him be compassionate of his own volition, which is always refreshing in a consort, no matter how antagonistic he may be by birth!

Pierce is more self assured. I think that if this story spanned months, readers would feel less annoyed with Pierce in Abandon. We get, what, two days with her? During which she’s just moved states and started a new school and bumped into the guy she met while dead? I think it would make you pretty unlikable too, but it’s hard to cut her slack, since we spend 300+ pages with her in this funk. Well, Underworld chronicles day 3, but in all the dimension shifting and Fury fighting, Pierce becomes decidedly more likeable and relatable. Just remind yourself: you’re not used to reading a book styled after Plato’s unities (when a play is in ‘real time,’ follows a few characters, and doesn’t change scene drastically).

As always, Meg inserts a very crucial sex scene with all the tact and grace one would expect of an author writing for teens. If you’re picking up the book for a bit of raunch, keep looking–all you’ll get here is a page of making out and non-descriptive lusting, but it serves its purpose well and ends up quite a significant turn of events!

Room for improvement:
Part of the difficulty when writing a book that takes place in such a short period of time is that the characters have very little time to develop, and any perceived character growth is probably more the result of mood swings than deep rooted personal change. As such, it seemed totally unnatural and unwarranted to me that Pierce should suddenly be madly, passionately, irrevocably in love with John. Excuse me? Two days before she was grudgingly agreeing to be nicer to him. Now, she’s all-but signed a contract to spend all of eternity with this guy. Can you say spontaneous?

The plot arch of this book is…not thrilling. Basically, in one day, Pierce must save Alex from a terrible death foretold by a magic mirror (cringe), which may or may not ever happen. Or could be past tense. Or just a mean practical joke. There’s a lot of dithering, filled in with great history about John, and about Uncle Chris. But, really, there isn’t much to chew on. Positives? This makes it a fast read!

I really love the story, but think that the trilogy format bogs it down and doesn’t do it any justice. Instead of one fat, rushed book full of murder, gods, Furies, betrayal, and romance, we get three choppy installments. At this point, I’m hopelessly addicted to the characters and can swear to you that I’ll be buying the third and final book, Awaken, before work on 7 May. But it had better make up for these books!

This book has a great story, and worthwhile characters, but the trilogy format and short time span ruin all the good! I’m sad to give this book 3 out of 5 stars–it would be 2, but I really find Pierce fascinating, and think she redeems the format, earning it another star! Do you guys like the trilgoy format? Let us know after you read it!