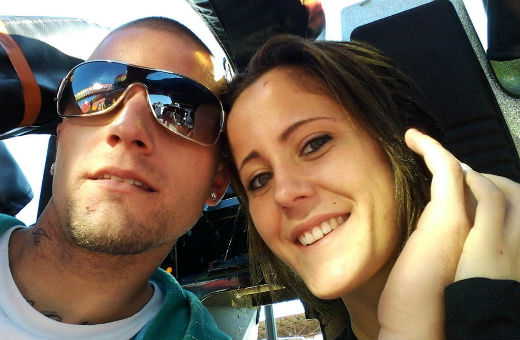 What a twisted game going on between Teen Mom star Jenelle Evans and her hubby of one month, Courtland Rogers. Actually, this chick is such a non stop drama queen that none of this comes as any sort of surprise! First they got married, then a few weeks later they had an ugly fight that carried over onto Twitter and that is where they alternate between airing all of their dirty laundry, then making up.

As it stands right now, the couple had a blow out which caused Jenelle to miscarry. She also filed 5 charges connected to abuse against Courtland. He has claimed she’s a junkie that likes a lesbian hook up now and then. The war of words has gone on for weeks and as it stands now, Jenelle wants an annulment and to forget this segment ever happened- in other words this is a typical Jenelle mess that she needs to clean up and sweep under the rug.

Courtland wants to make it work. I’m not sure exactly what part of this relationship he sees as functional and salvageable, but he’s fighting for Jenelle. In fact he claims he’ll die proving his love for her. As messed up as she is, I have to think Courtland is even worse! What about this relationship seems like a good idea to him? Seriously? If he had a shred of common sense he would run.

Jenelle needs to stop jumping from one bad relationship to another and take some time to seriously work on herself. Each relationship is worse than the one before and this one ended in a catastrophic way with the loss of her baby. Do you think Jenelle willtake some time to regroup or is she going to be prowling for a guy to replace Courtland Rogers in no time flat. Tell us your thoughts in the comments below!