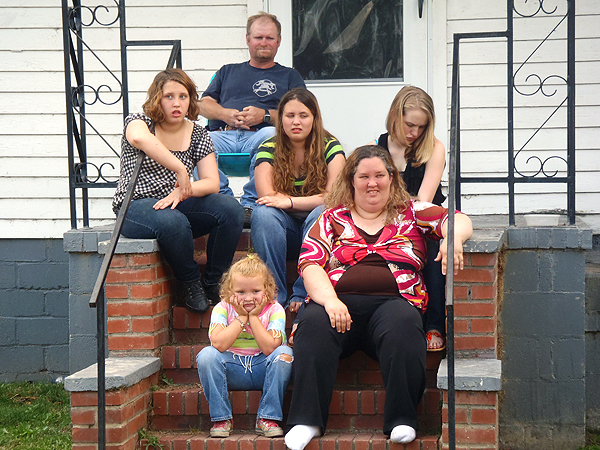 Don’t expect to see Mama June Shannon from TLC hit Here Comes Honey Boo Boo cruising around her little Georgia town in a luxury car or ditching their train side little home for a fancier place. Instead, the hefty mama is investing in her girls’ futures and putting most of the money into trust funds for all the girls. The rednecks we love to laugh at and with are raking in $15,000-$20,000 per episode as a family, but it’s not going to be spent upgrading their lifestyle.

Mama June is always watching out for her girls and we know she’s good with money. If you’ve ever watched Honey Boo Boo, you can clearly see the racks and racks of stockpiled goods she’s accumulated using extreme coupon tactics. And even as the show has blossomed into a huge hit for TLC and is now in Season 2, you can’t really tell any difference in the family’s lifestyle or standard of living.

They still live in their little clapboard house by the railroad tracks and everybody still looks like they’re dressing off the WalMart rack. The Boo Boo clan did buy a used Ford Expedition – several years old, but that’s been the only splurge and it’s not much of one. June says, “You’re never gonna see me drive a Range Rover or a Mercedes. I’ll drive one if someone else pays for it. Never gonna live above my means.“

Compare this to the Kardashians, who all started upgrading their rides, houses and wardrobes as soon as the reality dough started rolling in. June set up trust funds for all five of the girls and the loot for each episode goes directly into their accounts – with no stops in between. June told TMZ, “TLC puts the money into the girls’ trust accounts for me and then I get an email telling me how much everyone gets.”

June may not look like much, but she’s got a good head on her substantial shoulders and says, “I want my kids to look back and say, ‘Mama played it smart. Not like those other reality TV people.” These are the kinds of smarts that will keep her daughters from having to do Celebrity Big Brother (like reality has-been’s Spencer Pratt and Heidi Montag who have clearly blown all their loot). They also seem too grounded to go the Lindsay Lohan route and Mama June and hubby Sugar Bear seem to be taking good care of the girls and each other.

Rather than making reality TV their living – dad Sugar Bear still works as a contractor and the family lives on his wages rather than on their reality takings. This is super smart – think about how Kate Gosselin and ex Jon Gosselin are struggling to make ends meet now that the reality cameras have gone dark. If you haven’t fallen in love with this redneck family yet, you should give them a try. Silver fox Anderson Cooper and Vice President Joe Biden count it among their favorite shows!