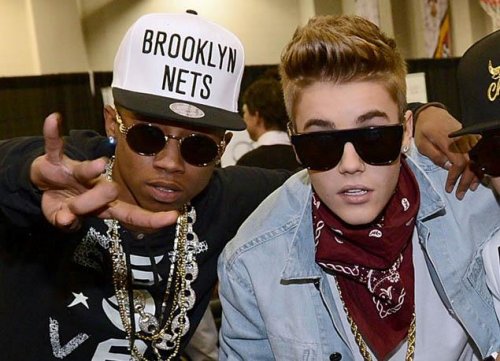 My mom always said a teenager never learned anything good from another teenager and I think her wisdom applies to Justin Bieber’s new friendship with rapper Lil Twist. Since he started hanging out with his new buddy – real name Christopher L. Moore – Justin’s been getting in more and more trouble that culminated with the death of a paparazzi that was following the singer because of the antics he’s been up to with his new smoking buddy.

Here’s a breakdown of what Justin’s been into since he started hanging with Twist:

12/31 Justin pulling up his shirt on stage, showing off his abs and generally trying to be a pimp

And these are just the incidences we’ve heard about – there’s no telling what these two have been up to when there weren’t cameras around to document their antics. His current behavior has me rethinking the infamous on-stage vomiting episode back in September. I thought for sure he’d gotten the flu – but now I’m thinking he was just drunk off his butt on stage. Right before he barfs, you can see people trying to get him steady as he wobbles onto the stage.

Lil Twist may be a bad influence on Justin or maybe Justin’s just lost his mind all on his own. After all, he is 18, universally adored and filthy rich – bad behavior often goes with the territory of youth and success. Let’s hope whatever is driving his increasingly poor decisions, he straightens up soon. We don’t want to see him headed down the Lindsay Lohan or Amy Winehouse path. Maybe his mentor can straighten him out – Usher. where are you? The Biebs needs you!

Harry Styles Covered In Acne – Is He Allergic to Taylor Swift?