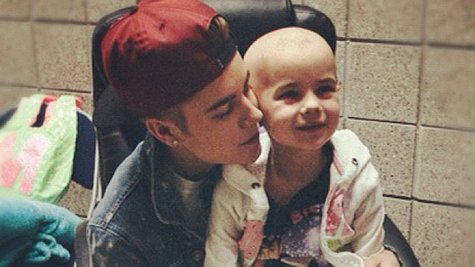 Justin Bieber’s having a tough life at the moment. The latest images on TMZ showing the Bieber smoking what appears to be marijuana, has already gone viral around the world. His reps and lion tamers are working overtime to dust the scandal off as “just another Bieber moment.” Over the years, Bieber has been trying hard to keep his public image as squeaky clean as possible, but ever since he became so tightly involved with rapper Lil Twist, his life has been falling apart at the seams. He lost Selena Gomez, his car indirectly caused the death of a paparazzo, and the latest images depict a very, very different Bieber from what we’re used to. Fortunately, Bieber’s heart still tends to go soft every now and then.

According to a recent report, the Bieber took the time out of his busy schedule and pot controversy to spend time with a cancer patient in Salt Lake City, Utah. Millie Flamm, the seven-year-old cancer patient, received the greatest gift of all when her idol and favourite pop star walked into her room to greet her.  He posted an image on Instagram and wrote, “Look at this bundle of joy. I love her.” Bieber sang a song to Millie, kissed her on the cheek, and handed her his guitar pick during the short meeting. Millie’s mother told reporters, “[Justin] walked in and her whole face just lit up.”

In October, Bieber changed the life of a four-year-old girl named Hailey Roser, and he also grew close to six-year-old Avalanna “Mrs. Bieber” Routh, who passed away from cancer in September. We’re so quick to write about Bieber as an unsympathetic fool, but these small acts of kindness make us forgive him for all of his indiscretions.

It truly is a beautiful world, don’t you think?