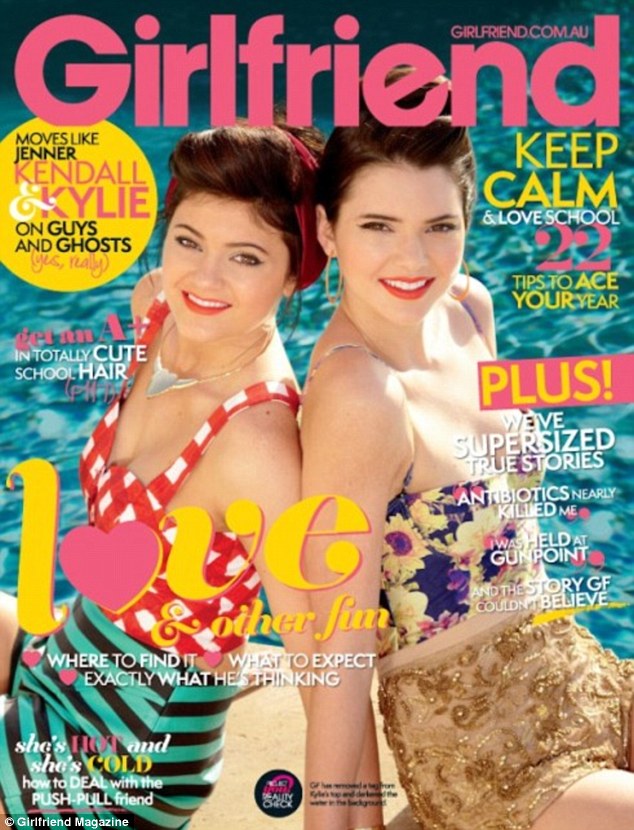 Despite previous reports that Kendall and Kylie Jenner wanted to forge their own path in life, outside of the Kardashian brand started by their mother Kris Jenner and perpetuated by stepsisters Kim, Kourtney, and Khloe Kardashian, it seems that the teenagers are more in line with the family business than ever! Kendall (17) and Kylie (15) covered Girlfriend, a teen magazine in Australia. The girls look cute, flirty, and age appropriate in 1950s style swimsuits and big hair.

Their cover story promises a good dish session on everything from guys to ghosts–don’t look so surprised, they’ve often tweeted about the resident ghost that haunts the Jenner home (and I don’t think they mean their quiet dad, Olympic medalist Bruce Jenner)!

This isn’t Kendall’s first cover. She flew to Australia in September to shoot a cover for Miss Vogue, on the cover of which she looked absolutely stunning! That isn’t to say a beautiful photo makes up for years of lost childhood, maternal exploitation, or will compensate for future years spent on a therapist’s couch. But, I’ll give her this much: she’s stunning!

But in the past, the girls have been pretty adamant about their plans, discussing a possible book series, but seem to be more interested in the world of modeling than anything else. Sure, they’re young, but is this really the best way to start a life? They know themselves better than anyone, so we’ll trust their decisions. But don’t forget! They may look 25, but they’re just teens! Kylie can’t even drive! Is all this work and media attention good for the girls, or should they try to go the traditional teenage route?