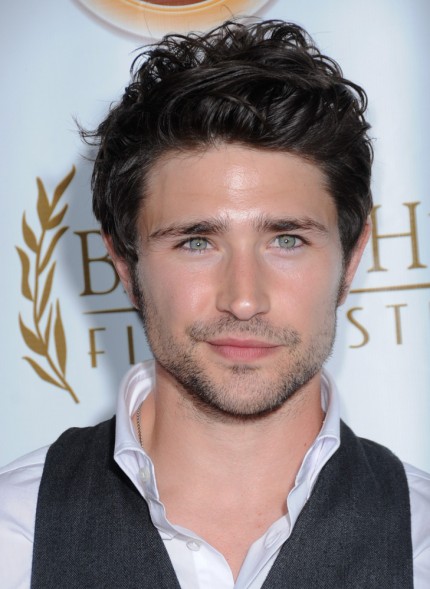 It’s official. “Kyle XY” star Matt Dallas came out as gay on Sunday night when he tweeted a picture of his fiancé Blue Hamilton, and wrote, “Starting off the year with a new fiancé. @bluehamilton. A great way to kick off 2013.” And the souls of a thousand girls died almost instantly… Dallas did not do the whole fancy thing of falling out of the closet with a bang. Instead, the blue-eyed star subtly released a tweet into the world late on Sunday night – and all was well in the land of fans. One fan wrote, “If this tweet means what I think it means… I’m ecstatic! And super proud to be a fan!” Another fan added, “So proud and happy for both of you! Congratulations, love & blessings for a long life together!”

Dallas has been targeted for several years by famed blogger Perez Hilton who, in true Perez style, speculated almost on a weekly basis that the young television star was gay. Soon after Dallas’ announcement, gay-oriented blogs all over the world picked up the tweet and made it instantly viral. Dallas follows in the footsteps of other well-known celebrities such as Zachary Quinto, Frank Ocean, Jim Parsons, and Anderson Cooper, who, in recent years revealed their sexuality in subtle interviews, tweets, and/or blog musings. These trends indicate that Hollywood is becoming more accepting towards gay film, music, and television stars. Many have thanked Ellen DeGeneres for this due to her public openness and courageous fight for gay rights in the USA.

According to Yahoo! News, Dallas’ publicist has not yet responded to requests for comments, but several media outlets believe that there will be  an official statement during the upcoming days.

What do you think Celeb Teen Laundry readers? Are you happy for Dallas and his fiancé? Let us know your thoughts in the comments below!