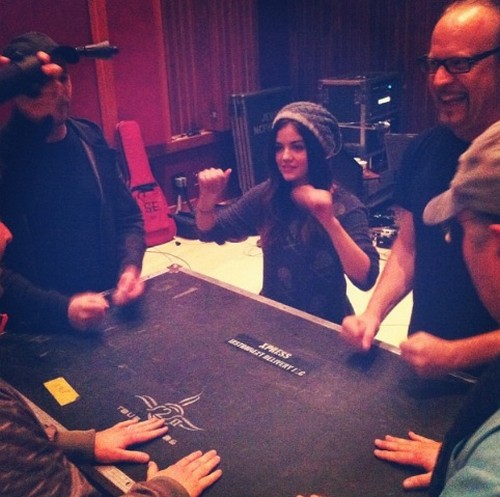 Everybody has a hidden talent of some kind and actress Lucy Hale is no different. You already know her as Aria Montgomery from the mega-hit, Pretty Little Liars. It’s a role that has brought her into millions of homes each week and has made her a household name. We already also know that the star sings and dabbles in music, with a strong leaning towards anything with a country flavor. Now she has also posted to Twitter a pic of her in the studio and the caption proclaims her to be a “professional sound effect maker”.

The caption may be a joke but what isn’t is the shear talent that Lucy has. She is also rumored to be angling for the lead character, Anastasia Steele in the film adaptation of Fifty Shades of Grey.  We’re guessing that after playing a teen on PLL for a few years Lucy is more than ready to prove that she can take on and successfully master much more adult characters. Fifty would definitely be a big step in that direction.

2013 is already gearing up to be a great year for the star. A new season of PLL is underway and after signing a record deal with Hollywood Records last summer, fans can expect an album at some point later this year.

Are you a fan of Pretty Little Liars? Are you keeping up on all of the continued “A” drama and are you addicted to the show?  Are you looking forward to Lucy Hale’s new music? Tell us your thoughts on the young Hollywood star in the comments below!