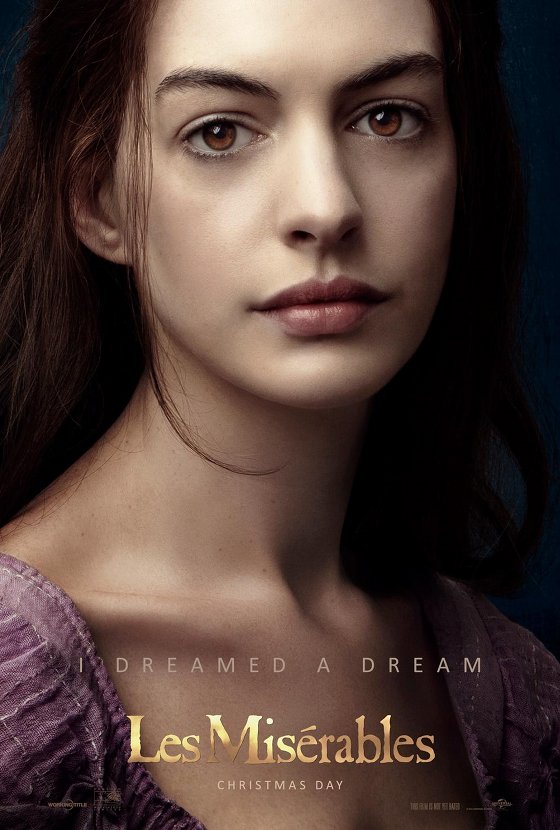 Les Miserables is not a movie for the faint of heart. I walked into the theatre with minimal knowledge of the plot: I knew it was an adaptation of the acclaimed musical, which was an adaptation of the novel by Victor Hugo. I knew it involved the French Revolution–or something of that sort. Really, I knew Anne Hathaway was in it. And my best friend said it was terrific. So I packed up my tissues and trudged in, expecting tears. What I got was a raw, emotional, inspiring story of Jean Vajean, a released convict struggling to right his wrongs and make a name for himself in post-revolution France. As always, spoilers!

The Plot: After nineteen years of hard labor for stealing a loaf of bread, Jean Valjean (Hugh Jackman)  is released from prison. He takes a new name, reinventing himself as a respectable citizen and mayor of Montreuil, where Fontine (Anne Hathaway) works to pay the boarding costs of her young daughter. Fontine loses her job so turns to prostitution. Jean Valjean finds her ill and homeless, and promises to adopt her daughter, Cosette (Amanda Seyfried). Fontine dies. Eight years later, Valjean and Cosette are hidden in Paris, on the run from Javert, former prison warden turned police inspector. Javert (Russell Crowe)  knows Valjean is a criminal, and is devoted to bringing him to justice. Cosette meets Marias (Eddie Redmayne), a young revolutionary, in the street, and the two fall immediately in love. Marias and his fellow students try to incite revolution, but are brutally slaughtered by the National Guard. Marias is rescued by Valjean, who carries him through the sewers. Marias and Cosette marry, and Valjean dies peacefully of old age.

The Singing: Director Tom Hooper sought a realistic portrayal, meaning you shouldn’t expect excessive breath support or Broadway belting. While every actor is truly talented, Fontine sings as if she is weeping–gasping for breath, softly, and with intense emotion. There are scenes where normal Broadway singing occurs–especially with Javert, who is never starved or on the run, so has the ease to sing well. Let’s just say you won’t want to buy the movie soundtrack. The style works great on screen, but you’d never pop it into a CD player to sit back and listen to the gasping noises of a realistic death.

The Rest: Expect to see amazing costumes, scenery, and staging. Anne famously lost 25 pounds to look the part of a starving prostitute. Helena Bonham Carter and Sacha Baron Cohen make the most revolting and perfect sleazy couple. Eddie Redmayne will melt your heart with his lopsided smile, and his revolutionary buddies will make you believe there is more to life than Facebook and designer denim. I maintained a steady stream of tears, as did my diehard fan friend. When the credits came on, people began to exit around us, while we hurriedly brushed away tears and began gushing about the movie. As I write this, I have another tab open looking up movie times. It’s an absolute must see–dare I say, the film that will define 2013. No offense, The Hunger Games: Catching Fire.