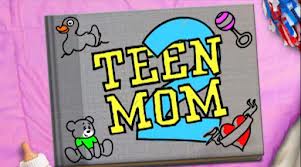 It looks like Teen Mom 2’s days are numbered and the loyal fans can thank attention seeking Jenelle Evans for the reality shows sudden demise!  It seems that Jace’s mom (oh yeah, that’s why she was cast in the first place!) has turned into a nonstop attention seeking train wreck, which is obvious to the half a million Twitter followers that she has! Let’s face it people follow because Jenelle is always on the verge of…something. Another police call. An overdose. A suicide attempt. Just something. She lives her life in 140 characters or less and people thrive on watching others’ unravel.

MTV has realized that Jenelle’s recent quickie marriage, pregnancy, miscarriage and impending divorce (all in one month’s time!) reflect badly on not just Jenelle, but the whole Teen Mom franchise. According to the New York Post,

“Insiders say producers are concerned the attention-seeking reality star has become a liability for the show, which tries to characterize itself as a cautionary tale about the hardships of too-young motherhood. MTV, once unafraid to push the limits of taste and exploitation, appears to be more protective of the image its programs project than in the past”.

Should MTV put an end to a series that instead of helping young girls not to make the same mistakes, has instead ended up glorifying continuous dangerous behavior?  The last thing that Jenelle needs is another season of having her life filmed for MTV’s audience. The ratings might be great but the show has clearly veered from its original intent and MTV needs to fix that. Think about it, how many of these Teen Mom stars have put together a decent life for themselves and their babies? Instead it seems they ended up in worse shape than when MTV decided to try and use them as an example of what not to do.

Should Teen Mom 2 come back? Tell us your thoughts in the comments below!