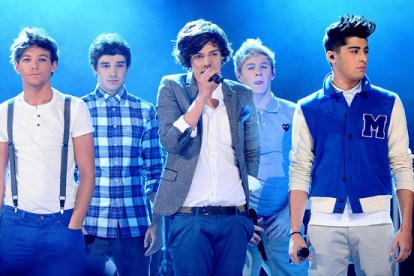 One Direction’s new music video for their hit single “Kiss You” was released yesterday (01/07/2013) and a small baby boom occurred in most high schools across the world. The campy video shows the group of superstars singing their catchy song and hitting a nostalgic chord with throwback re-enactment videos. One of the scenes is also One Direction’s performance on the US version of X-Factor – a completely unrelated and disjointed time-filler.

We have to admit: One of the scenes showing the One Direction boys jumping like drunken Beach Boys on Power Point/bad Flash surfboards absolutely killed us. In fact, we scream laughed so loudly that they could hear us in China. It’s cheesy, fun, and absolutely stupid, but really sellable nonetheless.

One Direction revamped the entire boy band genre and brought us an entirely new sound. The One Direction boys have come a long way since their tried and tested performance on the UK’s X-Factor. They didn’t win, but they were able to completely take over the world with their sugar pop, sweetened lyrics. While the video doesn’t necessarily highlight their style, it still fits perfectly into the teenage demographic they are aiming for. One Direction’s debut album – and subsequent follow-up – broke records as far as the eye could see. They were one of the first boy bands in UK history to have such excellent showing on the US Billboard Hot 100 Charts, and have been topping international charts ever since their rise to fame. They are also currently one of the most sought after music acts in the world – easily surpassing every single boy band of the 90’s. Many have referred to them as the new generation’s Backstreet Boys.

What do you think Celeb Teen Laundry readers? Do you enjoy One Direction’s music? Let us know your thoughts in the comments below.