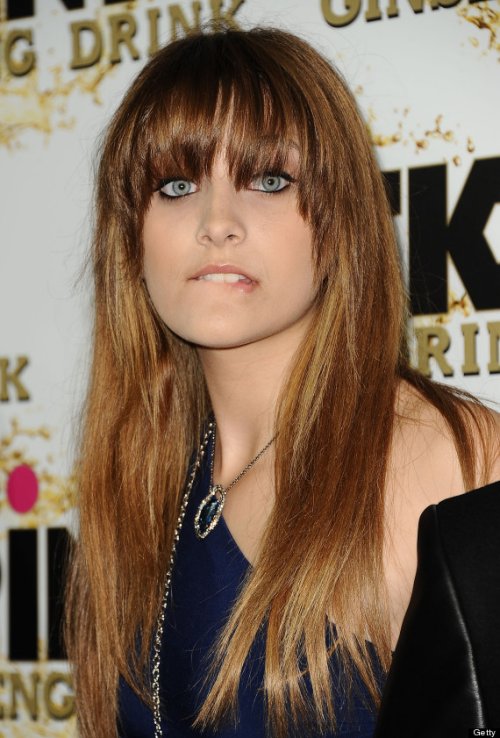 The National Enquirer this week is reporting that Paris Jackson is yearning for a mature relationship with a older man. Poor Paris seems to have lasting Daddy issues after losing her father Michael Jackson and is looking for an older guy to replace the void in her heart his death has left. A source close to the Jackson family told National Enquirer, “Paris can’t wait to be out on her own. She’s happy in her own skin and ready for life and love away from her family.“

The National Enquirer had an expert review Paris’ Twitter posts and told the tabloid that Paris is “longing for the father figure she lost when dad Michael tragically died” almost four years ago. One of her tweets said, “One day I want to find love like John and Yoko.” The Enquirer’s source said, “John Lennon lived in a fish bowl – much like Paris’ late dad, Michael.”

John and Yoko’s love was epic, but then again, it was cut short by an assassin’s bullet. I think that their love would have lasted, but it’s hard to say since his life ended with his tragic murder in 1980. The Enquirer said that Paris was sad that dad Michael never found true, lasting, unconditional love before his death.

The Enquirer source said, “Obviously, Paris is dream­ing of an ideal life and romance like that – away from her family and everyone else. “It wouldn’t surprise anyone if she found love at a relatively young age, and it will probably be an older guy – a father fig­ure.“

The Enquirer consulted Dr. Judy Kuriansky, a New York psychologist, who says Paris may see John and Yoko’s relationship as the “epitome of totally devoted love.” She added, “She wants nothing less than what she perceives to be the mature, supportive but intense, love these two icons shared. She’d wel­come an older, more mature relationship that would give her the security and support she misses since her father died.“

While their Dad was alive, Paris and brothers Prince Jackson and Blanket Jackson lived in seclusion, often going out wearing masks to protect their identities. But since they lost their Dad, the famous siblings have been increasingly in the spotlight, Paris in particular. She has over a million Twitter followers and frequently shares her private musings with her famous friends. Her tweets are very mature, intelligent and insightful and seem to be from someone far older than her 14 years.

Dr. Kuriansky told The Enquirer, “From her tweets, I get the picture of a very ambitious and headstrong young woman who mourns the loving, supportive relationship she had with her father. And she’s looking for a simi­lar safe and secure coupling so that she can move forward in her life and career.“

Paris was composed and mature when speaking at her father’s memorial back in 2009, so it’s not surprising that she is so mature and cerebral now. And like girls who are estranged or lose their father’s young, she may well fall for an older man that would fill the hole in her life left by the too soon death of her father. I only hope she finds someone worthy of her love and trust so she’s not hurt again.

Selena Gomez and Justin Bieber Are Broken Up For Good!