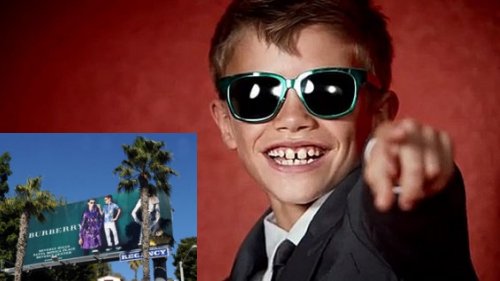 Romeo Beckham is a chip off the modeling block – his new Burberry campaign is a hit both here and in England and he just scored his first Sunset Strip billboard! Although Romeo is just 10, he’s already stepping into his parents’ fashion footsteps. Dad David Beckham is known for his sexy billboards and ad campaigns where he frequently strips down to his Armani underwear and washboard ads, but thankfully his son has all his clothes firmly in place.

The Burberry campaign featuring little Romeo was splashed out online and in magazines and newspapers as well. The campaign was shot by Mario Testino – known for his work with Gisele Bundchen and Princess Diana. His work is frequently featured on Vogue and Vanity Fair covers. Testino knows the Beckhams very well – he’s been behind the camera for many shoots with Romeo’s parents David and Victoria Beckham and has even shot them together. Below is one of the iconic ad campaigns he’s done with the Beckhams. 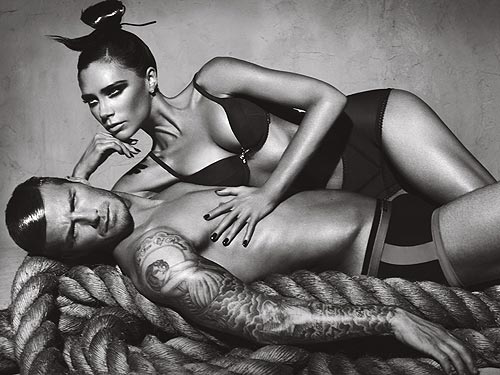 Bailey told The Sun, “This season’s campaign lights up with the infectious energy of an amazing young cast of old and new Burberry family. We had such fun shooting the campaign and I think that comes through in the images, which really reflect the upbeat spirit of the collection.” The Brit-born fifth grader is featured in the brands’ video ad campaign (see him in action below) as well as the print ads and billboards.

The Beckhams are in the midst of relocating back to their home base in London after more than five years in Los Angeles, so it’s impressive that Romeo is juggling school work, the big move and being the face of his first major modeling campaign. We shouldn’t be surprised that Romeo is comfortable in front of the camera – ever since his oh-so famous folks gave birth to him, he’s been in the paparazzi lens and photographed everywhere the family goes in public. It’s about time he started getting paid for working it for the camera!