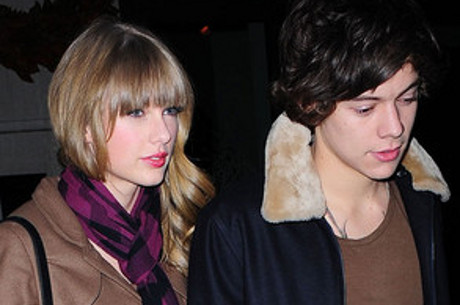 It didn’t take a psychic to predict that Harry Styles and Taylor Swift would break up eventually. Not only was Harry way younger than her, his schedule with One Direction would eventually undermine their time together! The web has been full of news and speculation about their split, but Taylor planted the seed of a hint on her Twitter yesterday!

The 23-year-old singer tweeted, “...’til you put me down.” When I read this yesterday, I spent a full 15 minutes on the internet looking up lyrics. I was positive that it was a line from Ed Sheeran’s song Kiss Me. Honestly, I thought Taylor was crushing on the British guitarist. They performed a duet together on her new album, and he’s the opening act for her Red tour! But my hunch didn’t check out, so I was left to wonder what was up.

Then, today, we read reports that the couple finally called it quits while on a 5-star Caribbean vacation. Their trip to the British Virgin Islands started well, the couple were all smiles posing for photos in the hotel lobby with fans. But something nasty happened in their room, causing Taylor to hop on the first yacht off the island! Harry stayed to hang out with Richard Branson in a hot tub with some bikini clad girls. So what happened? It could be the rumoured baby madness Taylor is experiencing. The two looked so happy on New Year’s Eve in New York, so what gives? Did you think they’d call it quits so soon? Does Taylor’s tweet prove she was “put down” by Harry?