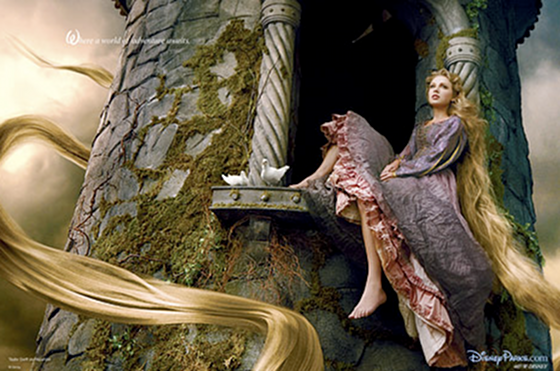 Taylor Swift may not have found her Prince Charming yet, but the execs at Disney still saw a princess in her! The recently single singer has dated and ditched a whopping dozen men in three years, but that didn’t deter casting directors from singling her out as the new face of Disney’s Rapunzel!

You may have seen the new celebrity ads for Disney Land–my favorite is actor/comedian Russell Brand as Captain Hook from Peter Pan. The photos help to bring the characters to life, and get a celebrity endorsement. After a photo session with Annie Leibovitz, and a little bit of Disney magic (or computer animation, as I call it!), Rapunzel was born. The picture shows Taylor sitting in the window of her tower, looking longingly at the world outside, while her cumbersome hair snakes around the base.

Taylor looks gorgeous in the photo, but we have to wonder if she was the best choice for the image. She’s got the face down, but her music (to me) comes off as “I’m the victim, won’t some handsome man come help me,” rather than “I’m a strong, confidant woman. I can do anything.” Maybe they were sticking to the original Rapunzel story, instead of the updated Tangled version, in which the Princess does a lot of the rescuing herself? Do you like Taylor’s ad? Could a new Rapunzel movie be in the making, or, as with their other celeb character posters, is this just a one time thing?