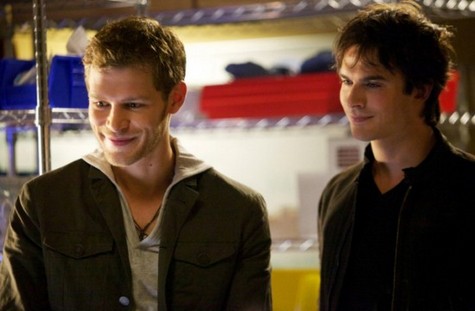 This is great news! For those of you who, like me, are moderately obsessed with all the cool vampire backstories on the CW’s Vampire Diaries, it’s time to have a little party! The CW is working on a spin off series that will focus on the original vampires, especially Klaus and mysterious werewolf Hayley, tentatively called The Originals.

The pilot will be worked in to one of the regular VD episodes, and will air in late march. Network executives are pretty tight lipped about the development, but it sounds like they’re still working out casting for the two shows. The Hollywood Gossip reported, “The title refers to Klaus’ status as one of the original vampires in the show’s mythology. Guy has been doing his badass, yet charming thing for a long time. Also prominently featured will be werewolf Hayley, introduced in the current fourth season. She and Klaus return to the French Quarter of New Orleans. There, in the city he helped build centuries earlier, Klaus will reportedly be reunited with a Marcel, a former protege.”

This sounds awesome, but it brings up some questions! Does this mean the Originals will be leaving Vampire diaries, or will the shows have some cast overlap? I am not willing to sacrifice any of the juiciness of Vampire Diaries for the sake of a Klaus show, no matter how much I love his accent and smouldering eyes! As far as I can tell, the CW rarely gets it wrong, except when they make super cringe-worthy, predictable shows–but that doesn’t happen often! Would you watch a Vampire Diaries spin off??