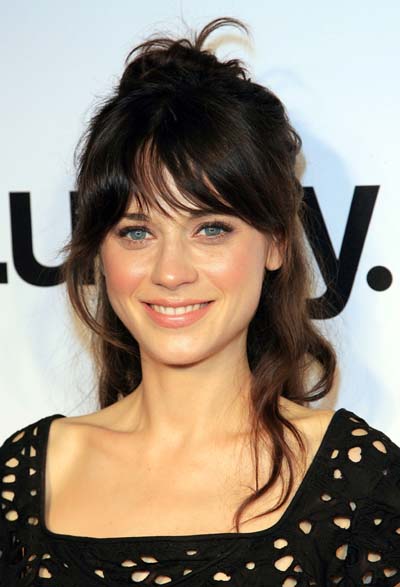 Zooey Deschanel is one of the coolest gals in Hollywood. She looks like Katy Perry, acts like an indie actress, and still manages to keep the public fascinated with her beauty and awesomeness. And she just became cooler. In a recent Glamour magazine interview, Deschanel exclusively speaks out about super skinny girls and the tragic anorexia epidemic that’s hitting the streets of Los Angeles.

“Actresses have definitely gotten thinner over the course of my lifetime… There are a lot of actresses who are unhealthy-skinny – much, much too skinny,” the 32-year-old explains. She adds, “You can’t Pilates to that… I’m a very small person, and if I lost 15 pounds, I’d look like them; it’s scary. For young girls, what does that say? You need to look this way to be successful? That’s not true. You do not need to look or be anorexic to be successful in Hollywood. The range of what’s acceptable is larger than what people believe.” OMG! How awesome is she? Seriously?

Deschanel also opened up about her past experiences with love and romance – especially after her publicized divorce from husband of three years, Ben Gibbard. Her parents have been married for over 40 years, so Deschanel uses them as inspiration in her quest for love. She revealed, “My dad is so sweet; he’s always like, ‘Your mom is a better cook than any restaurant.’ And I remember my grandfather looking at my grandmother, saying, ‘She’s the most beautiful woman in the world.’ You can’t get better than that. But we live in a different time… I don’t get it when people just have the goal of meeting someone – then it’s only about the goal. I’ve never been a five-year planner.”

Don’t worry Zooey – you’re cooler than a cucumber! We’re sure there’s an amazing man waiting in the wings to sweep you off your feet. If all else fails, she can always move in with us? We’ll give her cupcakes and cuddles. Just an idea.

Zooey Deschanel Films For The New Girl In LA! & Other News