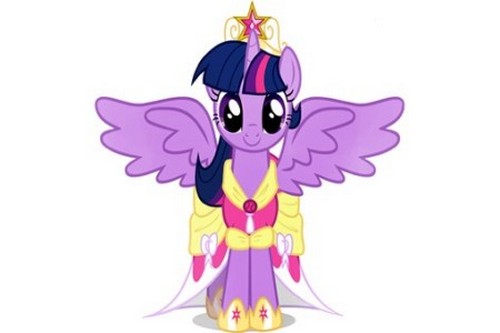 A shake up is coming to Ponyville. My Little Pony: Friendship is Magic is about to crown a new princess. Twilight Sparkle will receive her tiara on the show’s season finale. While the female fans of the show will delight in the change there is a group of fans who are less than thrilled that their lovely purple unicorn is evolving.

Super fandom nerdiness is a good description for a sub group of fans called The Bronies. This group consists of adolescent males and grown men who obsess about more than just the show’s plots. Sethisto, ( whose real name is Shaun Scotellaro and is the founder of Equestira Daily) tells Entertainment Weekly “It’s just your typical overreaction to something changing in your favorite series. I think the main thing is that it’s happening to a character so many people connect to. Twilight Sparkle, she’s more of a nerd. She’s like all of us, that geeky nerd who reads books and gets all excited about stupid stuff.” The Bronies aren’t just afraid of change for the sake of keeping the show interesting. They fear they will no longer be able to connect with Twilight Sparkle. This purple unicorn becoming a princess will not change who she is deep down. The Bronies should embrace that Twilight Sparkle is evolving and they will learn even more about her as she accepts her new status in Ponyville. My Little Pony: Friendship is Magic is a show about appreciating friendship as we grow and change, and face what life throws us.

Sethisto also thinks there is a money angle to making Twilight Sparkle a princess. He tells Entertainment Weekly “A lot of people think [the princess transformation] was mainly Hasbro’s fault, just to get more toys out”. He may be right. Most children’s television shows are marketed aggressively by creating a lot of toys and doing as many tie ins with other products as they can. Bronies probably feel marketing toys based on Twilight Sparkle as a princess adds salt to their wounds. Viewers need to remember that shows they watch on television are produced to make money as well as entertain the audience.

Hopefully the Bronies will stick with the show through the changes with Twilight Sparkle. They should give the new plot a chance and not abandon the show based on an emotional reaction. Ohnotheydidnt.com reports that a similar backlash happened in the Royal Wedding episode when Candace the pink alicorn became a princess. The website also says the fans ended up loving the episode (which was the final episode of season 2) and sticking with the show. I’m sure the same will happen as Twilight Sparkle enters a new chapter in her life.