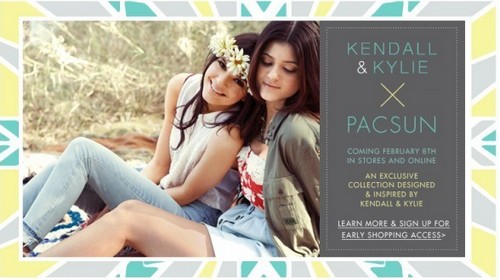 Kendall Jenner and Kylie Jenner‘s clothing line has started with great success after PacSun sold out several of their pieces in less than a week. The teenagers, who launched their clothing collection in Las Vegas on Friday will be happy to hear that their designs for the mint green fleece top with a feather art screen on the front, and the olive geen shirts are have all sold out.

It’s fair to say that Kendall and Kylie are quickly becoming successful businesswomen in their own right; having recently explained that they were very hands-on with the clothes they would be presenting their millions of fans. According to the two, their collection is very much based on what they would wear on a normal basis, adding that it’s very much influenced by the California style.

“We always wanted to do a line and when we did a line we wanted it to be California based, so PacSun, we feel is just a perfect fit,” while 17-year old sister Kendall continued: “We wanted to go with something a little more California fun, summery…for our first line and wanted to be able to build from there.”

In the end, we all know who is behind the success of this all. Mrs. Kris Jenner! Yup, call her what you want but she definitely knows how to get the money coming in, and let’s not forget , now that we know her daughters’ clothing line is doing very well with PacSun, it will most likely expand worldwide and Kris will be swimming in $100 bills.

Kendall and Kylie’s line currently retail for between $20 to $75; from scarves, shirts, cardigans and more. Can you only imagine how successful they are going to be once they unveil their own jewellery line later this year?!