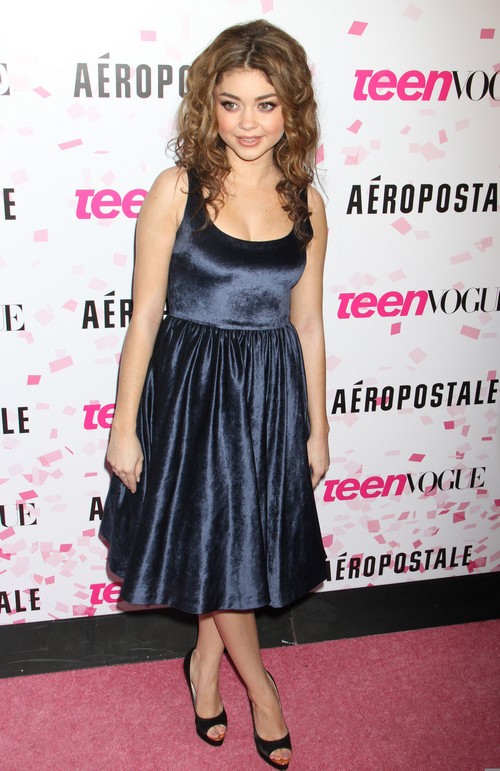 Sarah Hyland has inked a new endorsement deal with Heart Calgon, the actress confirmed earlier this week. Trying to expand her business empire, the 22-year old will promote the companies different range of fragrances, including Fresh Start, Hot Date, Sweet Crush and many more, while she will also film commercials and a series of online videos to get the buzz going.

The new fragrance collection was created for a more hip and young audience, and whilst many names were brought up in the meetings on who could be a good representative for these new products, Sarah seemed to have beaten out her competition with her charm and cuteness. Ha. She’ll be on a heavy work schedule now that she has a new job, and seeing that this collection is set for a Spring launch, she better make sure she keeps up with the workload. Let’s not forget that Modern Family still happens to be the big money maker for her, so all of her attention shouldn’t be put on Calgon.In an official statement, the young starlet revealed the following: “I love the concept of playing up different sides of my personality, so whether I’m walking the red carpet or going out for a night with friends, it’s fun to mix and match with my scents,” she said in a release of her latest endorsement deal.

We could definitely see Sarah expand her empire to even bigger things such as a clothing line, – she has millions of teenage fans and if you were to consider how well Kendall and Kylie Jenner are doing with their clothing collection at PacSun (which already happens to be selling out nationwide), there’s no doubt in our mind that Hyland could do the same. She’s so adorable!

So – what do you think!? Will Sarah doa good job as the face of Heart Calgon, and do you think that her work schedule with Modern Family could get in the way of things at all?!