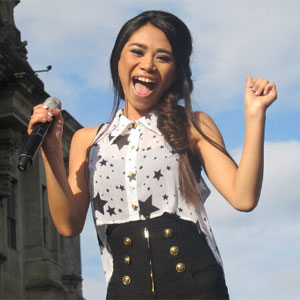 It looks like being an American Idol runner up has led to some really great things for 17 year old, Jessica Sanchez.  The young diva-in-training performed last week on the show that  first launched her into millions of homes and then took a few minutes to chat with People.  It was already confirmed last October that Jessica would be appearing on the hit show Glee, at some point this season, but until now no real details on that appearance were available. Now Jess has a bit more information to share on her role.

“I’m playing a student from a rival school who is supposed to be a legendary diva – a powerhouse singer.  I’m very excited because I’ve never acted before. I really want to meet [Naya Rivera]. She’s got that attitude and I love it.”

Jessica is set to begin filming in April and (so far) she is signed for two episodes, including the season finale. If you’re already a Glee fan then you’re well aware of the possibility of Jessica and her character returning in the future. The producers are smart enough to pay attention to fan response and  to in turn give them what they want. That said, if you think Jess rocks her role then don’t be afraid to speak up!

Do you like when reality stars get to cross over onto other shows? Jessica seems like a really great fit for Glee. She can obviously belt out a tune, hits the right demographic and the fact that she’s hot won’t hurt anything either. Will you be tuning in to see her do battle with the New Directions? Tell us your thoughts in the comments below!