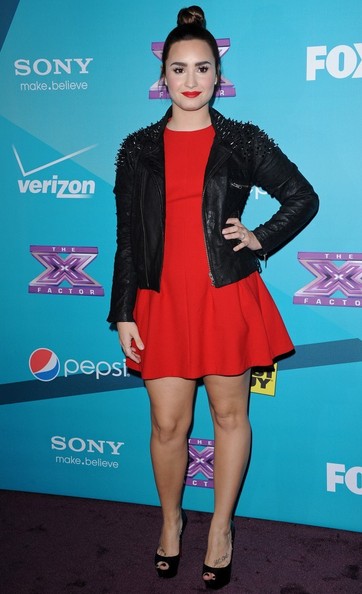 Looks like Simon Cowell was impressed by Demi Lovato‘s judging skills last year, because according to reports, she has been asked to come back for the show’s third season which begins filming in just weeks. Her answer…. YES!! The singer, who recently debuted her new single Heart Attack, has told producers she would sign on to the show as soon as the contract is passed through her way.

Music mogul, Mr. Cowell, was said to have been shocked yet glad that Lovato did such an amazing job last year despite all the bickering the two shared on live camera. At times, it was clear that Demi was grabbing all of the attention away from every other judge, including Britney Spears who has since announced her departure from the show to continue working on music and going on tour.

A source tells HollywoodLife that the former Disney starlet has already been locked in to do the show, and this year, the execs of the program are switching her contract up a little. She has agreed to perform with Fifth Harmony during a live episode as the girl band – who came third last season – are gearing up to release their very own first single. Along with this, she is also expected to collaborate with the bad on one of their songs later this year.

Demi recently said she would love to work with the girls: “I am always open to collaborations, and I would like to show these girls a ‘Thank you,’ and show them how much they have done for me. If I can help in [an] album in any way or to collaborate since they are so down to earth girls.”

Her salary has also been increased from $1 million to $3 million, a close source to the finances of the show has explained. Simon has got himself a keeper on his hands and if the show gets renewed for more seasons to come, Demi’s spot won’t be replaced anytime soon. Cowell thinks she’s great, and so do we!