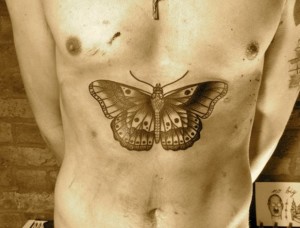 Harry Styles has gotten himself yet another new tattoo, but this one seems much bigger than the others — it’s unmissable. The One Direction member can be seen with a huge butterfly on his stomach, making it one of his dozens of other tattoos he already has, but what do you make of it? Nice or very odd?

The singer supposedly had it done earlier this week in London by tattooist Liam Sparkles who supposedly questioned Harry on why he would want something like that on his belly. After asking him whether he was sure or not several times, Harry refused to budge and they went ahead with it. We’re not impressed with it, it looks pretty bad.

But, though it doesn’t tickle our tongue, it might tickle Shaniece Nesbitt’s one. Ha. Who is rumored to be dating Styles after one of his members passed her away his phone number during a concert gig in Belfast. The two later on met up and are said to be a pair now. Wow! Wasn’t that quick?

But back to the tattoos, One Direction fans may recall the boys asking people on Twitter if they’d be interested in sending a video of themselves with their 1D tattoo over to their team in a chance to appear in their upcoming movie, One Direction 1D3D. However, their spokesperson quickly released a statement saying that the idea wasn’t thought through properly.

They were worried that young fans may try and get themselves a tattoo just so that they can appear in the movie, which is why their rep had to clear it up as soon as possible by saying: “This tweet was posted in error and has now been removed. One Direction do not want to encourage any of their fans to get 1D tattoos.”